The Ibda’a media student awards are drawing near and one can actually witness the enthusiasm and eagerness being reflected on the faces of the students. Launched in 2001 and initiated by the Dubai Media City under the patronage of His Highness Sheikh Mohammed bin Rashid Al Maktoum, UAE Vice President and Prime Minister and Ruler of Dubai, its goal is to hone and encourage the media talent hidden within every student around the world. The event is organized each year by the Dubai Media City in association with the International Advertising Association (IAA). In just a couple of years Ibda’a has achieved its much deserved acclaim and is now a coveted media event not only within the Gulf but globally as well. It is the best opportunity any student can grab as finalists from over the world get flown down to Dubai for a grand celebration and can also look forward to exciting prizes, workshops, training sessions as well as internships with several media organizations. Participating in Ibda’a awards might not only win u fame and exposure but it is also the perfect platform to showcase your talent. For Ibda’a 2008 students can participate in the following categories: · Journalism · Radio · Animation · Graphic design · Analogue photography · Digital photography · Print advertising · TV advertising · TV documentary · Film / TV feature · Mobile Film
All undergraduate students can participate in the contest including those who graduated in 2007. Students are requested to follow the guidelines prescribed for each category. The last date for submitting the entries is Tuesday, October 7, 2008. 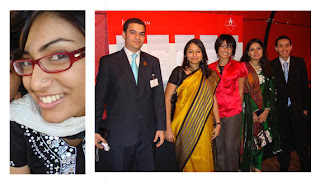 Last year, one of the students from the media department, Uzma Atcha participated in the contest and her article on Thalassaemia in the UAE was short-listed for the Journalism category. She was not aware of the Ibda’a awards until Shaikha Al Ghurair came to Manipal University and informed the students. On asking her about her entire experience, she says, “The whole Ibda'a experience changed my life. From the day I had found out I got nominated (there was a lot of jumping and squealing when that happened) right until the day after the awards ceremony...It was surreal really. I mean, I met so many like-minded students from across the globe who were just so talented....it actually made me feel inadequate...Being the youngest finalist and the only freshman there, I felt privileged in the sense that I got so much exposure to the industry so early on in my college life. I would recommend that everybody tries to send in an entry this year because those five days with the finalists (23rd-28th December) was perhaps, not to sound too cheesy, one of the best times of my life, and will definitely be an experience I won't forget too easily.” Uzma’s achievement not only added to the success of the media department but also helped the university make its mark globally. We hope several students participate this year as well and wish them good luck as they strive to bring glory to Manipal University. For further details regarding the entry processes and requirements for each category visit www.ibdaa-awards.ae.
Students can also mail their queries to ibdaa@dubaimediacity.ae.
All entries have to be submitted to Mr. Sabir Haque by October 7, 2008.
by Disha Laungani
Posted by MANIPAL DUBAI BLOG at 12:29 PM