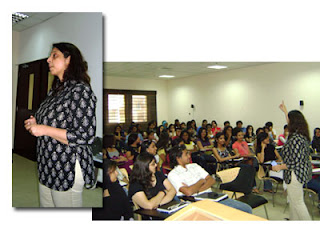 A workshop for Public Relations and Advertising was held for the second and third year media students by Ritu Motial. She has been in the field since the past twenty years and has worked with numerous big brands like Coca-Cola and Reader’s Digest. Her experience and examples from her own professional life proved to be extremely fruitful as she gave the students an insight into the industry of Advertising and P.R.
She started off by asking the students as to how much knowledge they had about the two fields. The workshop, from the time it commenced till the end turned out to be exceptionally interactive. There was a volley of questions and answers which indeed solved the doubts of several students. The concepts of advertising and public relations were discussed in great detail which resulted in clearly defining the differences between the two. She stated that the advertising and public relations were two very diverse fields and they should not be labeled as similar. The transition in both the fields, throughout the years was spoken about as well. She also advised the students and provided them helpful tips as to how to conduct themselves within the industry. She said that public relations may not have much scope within UAE but it was a booming industry in other parts of the world...an industry with serious potential. She brought the workshop to an end by saying that “it (Advertising) is not about your product, it is about someone’s need…”
Everyone attending the workshop found it extremely useful. According to Pooja Sagar, a third year student specializing in advertising and PR, said, “It was very informative. I particularly liked the way she tried to associate everything with her practical knowledge. I definitely learnt a lot. As I am interested in PR industry as a career option, I am looking forward to her next workshop.” Nawal Sakkaf, a second year media student said, “The workshop was actually very vital for our course since this year we are being introduced to advertising and PR. I think this is the best way we could have understood the course…gaining first hand information from someone within the industry itself.” The two hours turned out to be quite eventful and it was the perfect blend of imparting knowledge with a dash of fun which left all the students delighted.
Posted by MANIPAL DUBAI BLOG at 12:05 PM