If you overlooked the signs that read ‘Donate blood’ put up in college last week, then you definitely must have missed out contributing for a noble cause. The blood donation camp that was held in our very own auditorium, on the 28th and 29th October 2008 has added another year of success to the Biotechnology department.
A total of 14 active student volunteers, all from the biotechnology department helped make the blood drive, a triumph. “This year, we did expect a bigger number as we focussed on not only our campus but, the entire Academic city to be part of our blood donation drive.” said Mrs. Kalyani Ganesh, professor from the Biotechnology department. With an excellent response of donors, this year a total of 200 donors have contributed and made a marked difference in increasing blood reserves for hospitals. “On the first day, we had 103 donors followed by 97 donors on the second, making it a total of 200 people who took the initiative to donate blood.” said Miss Latha Adnani, a student volunteer. “The blood donation camp has been organized very well, by the Biotechnology department of Manipal University, Dubai, everything we need or require has been provided instantly” said, Mrs. Jolly Sebastian, Lab technician from Al-Wasl hospital, she also added that she gives the donors a well deserved round of plaudit for being part of this noble cause, as it takes a lot of initiative from an individual to do so and she hopes it continues in the future. 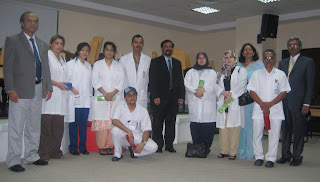 The team of professionals from Al-Wasl hospital with Dr. Ramjee, Director of Manipal University and Mrs. Uma Prasad, Student services coordinator. The biotechnology department would like to take this opportunity to thank all the donors and Al Wasl hospital staff, who made this drive a successful aftermath.
Posted by MANIPAL DUBAI BLOG at 1:23 AM

Email ThisBlogThis!Share to TwitterShare to FacebookShare to Pinterest
Labels: Dept. of Biotechnology

Giving blood to save others life is really a great work for humanity.
http://www.funandmaza.110mb.com