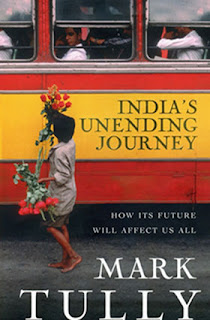 Our media correspondents visited Emirates Airline International Festival and following are a series of features written by our Print Specialisation Students - this one by Fatima Hussain
---------------------------------------------------------------------------------
Amidst the deafening noise of the applauses of the crowd, walks in an aged man with white hair, dressed in a formal light pink shirt and limping on one leg. As the roars of the audience settle down, this man steps up on the raised platform and stands against the podium. Before the listeners who sat in neatly aligned rows of chairs, in the Igloo at Dubai Festival City, stands the ‘Voice of India’. The Indian-born but British educated author, who served for two decades as BBC Bureau Chief in India; a country that he loved and always portrayed in positive light. This man is no one other than Sir Mark Tully, himself. Awarded with Knighthood in 2002 and a Padma Shree (a rare honour for a non-Indian) Mark Tully has written many books on India, such as The Heart of India, Divide and Rule and two books on the life of Jesus Christ. He even once considered attaining priesthood. With his gentle smile and humble attitude Sir Mark Tully begins to talk about his new book: India’s Unending Journey, the main subject for the day’s session. Starting on a lighter note, Mark says, “I always considered words (on radio) to be better than the pictures on Television”. “Therefore, I consider ‘Powerpoint Presentations’ (or PPTs as they are known today) to be boring and I shall be using oral speech to communicate to you”, laughs Mark. “Culture in which you are born and educated stays with you”, remarks Mark Tully before shedding light on this latest book. “India’s Unending Journey is a book which has the main influences that India had on me. The ‘ex-title’ that I chose for the book, but which my publisher rejected, was Uncertainty of Certainty, because it is wary of certainties!” “The book furthermore talks about following a middle road and seeking perpetually for balance; by looking into ourselves, which is similar to tight-rope walking”. Associating the Indian culture with tight-rope walking, Mark observes, “The Indian culture has remained balance for thousands of years, and it will remain balanced- therefore, the title of this book – India’s Unending Journey”. Admiring the Indian ‘balancing act’, Mark says, “Balance is the main subject of the book. There exists a concept of Global Village today, but it is remarkable that in India all the religions in the country accept that there are many ways to God. This shows the broad-mindedness of the Indian tradition”. “’Thinking’ that there is an entirely right road, is what results in an imbalance. The present economic situation is due to this- we have taken capitalism too far”, smirks Mark. Commenting further on the relationship with the on-going global credit crunch and the book, Mark points out, “This book was written before the economic crisis”. Quoting from the book, in terms of its relevance in terms of economics, Mark reads, “Theology has be dethroned and replaced by economics… The latest God is the economics!” “My book isn’t on an anti-economics, though!” exclaims Mark Tully. “It is anti-taking-economics-too-far”. “We have got into this mess that we have got into because we have taken socialism too far; a system of powerful Governments and rape tapes has taken over. The world has entered from black of socialism to white of market socialism”. “The market is a good servant but a bad master”, says Mark, quoting an Indian economist. Speaking on the market in India, Mark adds, “I have observed the Indian consumer goods market very carefully. Earlier it was dominated by the Babu’s (due to the Government licenses for businesses and shortage of consumer goods). Because capitalism was taken too far, it invaded the democracy and democracy was underlying due to the power of businesses”. “The only solution to this problem”, says Mark, “is what Joseph Stieglitz, chief advisor to President Clinton once said: What was needed was us to return to a situation where there was no doubt at all between the demands of making a profit and needs of the society and those demands could only be achieved through Government Regulations”. “Market Capitalism is driven by consumerism which in turn is driven by greed”, states Mark, highlighting the main words that that have led to the concept of materialism. “Thanks to the market culture, materialism has evolved. When our society becomes too materialistic, religious people feel driven in a corner and they armour themselves with ‘certainty’ and in our eyes they appear to be ‘fundamentalists’. Then erupts the debate on religion versus materialism – mainly due to lack of belief on things beyond reason”. After some serious food for thought, Mark jokes, “I know I sound like a preacher. I always wanted to be one. But my Church said that I was better off being a journalist!” Ending his 30 minute long address to the audience, Mark gives a word of precaution to the audience. “I am not saying that India has got it alright because of the tradition of balance or a great edifice of Indian civilisation but it can get out of balance. If I deny things like profitability, then of course one is imbalanced and plunge into shadows”.