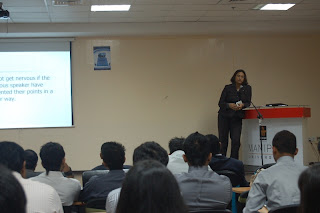 Mrs. Nusrat Ahmed giving the students tips on how to conduct themselves in a group discussion (photo - Fatima Hussain) 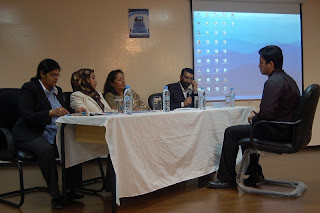 The panel of interviewers for the mock interview sessions: Mrs. Fouziya, Mrs. Shazia, Mrs. Uma Prasad and Mr. Sudhakar, interviewing Lohit Jethwani
(photo - Fatima Hussain)
Day 3 of the Management Students’ Workshop began at 8:45 AM with an enlightening PowerPoint presentation by Mrs. Nusrat Ahmed on ‘How to Handle a Group Discussion’. Students were instructed on how they should reflect their leadership qualities during a group discussion.
Followed by the presentation, thirteen group discussions were held in five classrooms, three being on the 1st floor and two on the 3rd floor. Here, students were evaluated on the basis of their content, creativity and originality, body language, group behavior and leadership qualities. Each group comprised of about six to ten members. Topics ranged from standard management questions like ‘Is management an art or a science?’ to ‘Is Slumdog Millionaire selling India’s poverty?’
Later, mock interviews for the position of a Management Trainee were carried out for the rest of the day. Interviewees for the Mock Interviews were Mrs. Fauzia, Mrs. Shazia Khan, Mrs. Uma Prasad and Mr. Sudhakar.
The first session for the Mock Interviews started at 10:45 AM and went on till 11:45 AM, after which there was a lunch break till 12:30 PM.
The second session ended at 3:30 PM, soon after which the winners for four categories were announced: Best Groomed Male – Gautam Kheterpal, 3rd year, Sec.B Best Groomed Female – SriLakshmi, 3rd year, Sec.A Promising Candidate – Kate Saldana, 3rd year, Sec.A Future Leader – Varsha Jayakumar, 3rd year, Sec.B 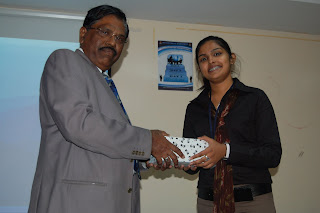 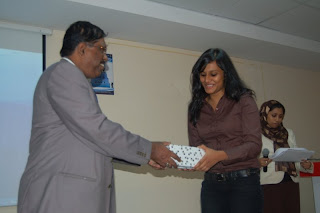 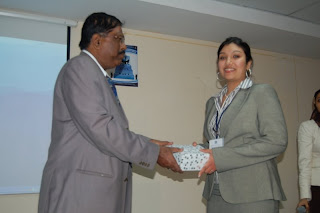 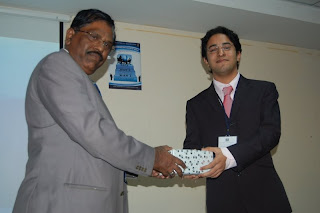 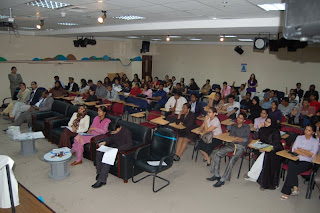 Day 3 of the Workshop in progress... (photo - Sambhram Pattanayak) 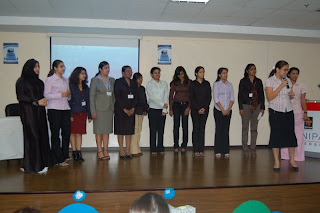 Email ThisBlogThis!Share to TwitterShare to FacebookShare to Pinterest
Labels: Dept. of Management