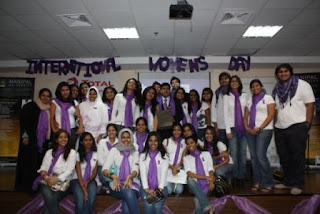 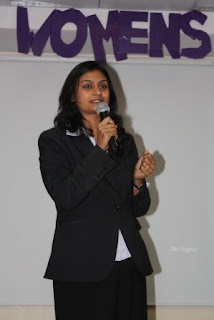 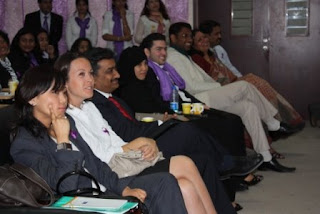 Guests speakers and members of the MANIPAL DUBAI family enjoying the event
Guest speakers from UNITED HOPE, delivering a speech at the event 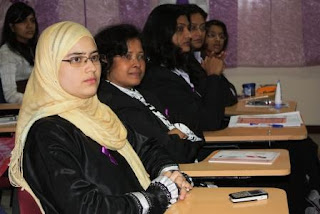 Faculty members of MU present at the event
Dr. MD Firoz, Chairperson of the Media Department, presenting a token of appreciation to a guest speaker
“Behind every successful man, there is a hand of a woman”, goes a famous saying. In order to celebrate ‘the person behind all the successes’, on March 9, the final year students of the Department of Media and Communication, specialising in Advertising and Public Relations, at the Manipal University Dubai, organised Women’s Day activities, marking the 98th International Women’s Day. A sincere attempt at saluting the spirit of womanhood, the event was organised under the guidance and supervision of H.S. Shubha, Senior Lecturer at the Department of Media and Communication and the course in-charge of the subject under which the event was organised. As enthusiasm and excitement swirled around the campus, the students and faculty members were seen flashing the purple-coloured gem studded ribbon-badges, distributed by the students at the entrances - purple being the colour scheme of the event. With ‘freebies’ being distributed in the corridors of the campus, the main event was held inside the college auditorium, with special guest lectures and other activities to engage the audience. The 4-hour long programme began at 9.30am with an opening speech by the students of the organising team, followed by sessions of special lectures by guests who were present to talk on this auspicious occasion. From a working media professional, a highly experienced teacher, to a bold, yet fun-loving female lecturer, each guest of honour presented the audience with a potpourri of different, yet special point-of-view on women with references to their real-life experiences. The speakers included, Ms. Alison Richards, the founder of the Women In Film & Television in Dubai who spoke about the growing trend of women media professionals, Ms. Uma Prasad, the Students’ Services Co-ordinator of the University who spoke about her mother-in-law being her inspiration in life & career and Ms. Seena Biju, Senior Lecturer at the Department of Management who engaged the audience with an intense yet humorous dialogue. A presentation was also given by Ms. Jameela and Mr. Basil of United Hope organisation, also known as the ‘City of Hope’, the first shelter for abused women in the UAE, founded in 2001 by Ms. Sharla Musabih. The NGO takes care of women and children who have been subjected to heinous crimes such as rape, domestic violence, and abuse. Other speakers included Ms. Denis Tanagar, a representative of Total Lubricants, supporting the Women’s Day celebrations, along with Emirates Driving Institute, wanting to do a similar campaign, unique to a company such as theirs. Guests from Emirates Driving Institute included Head Instructors, Mr. Wasim and Mr. Rashid Ghulam, who gave an informative presentation on ‘Defence Driving’, played video clips, related to road accidents as a result of careless driving and also distributed a safety kit which included a handy tyre-pressure check keychain, a car shade and booklets on safe driving. Mr. Anurag Kshattriya, QHSE Manager, shared his views on ‘Psychological behaviour during driving’ at a group discussion. Students, who appeared to have moulded themselves in to a carefree and ‘happy-go-lucky’ attitude in college, yet struggled in their personal lives were recognised and presented with special awards for sharing their real-life experiences with the audience. Japinder Kaur, a final year student in B.A. in Media and Communication, gave a heart-rending speech about her fellow colleague Puja Dilip, who wanted to be independent and showed it by working part time and funding her tution fees. 26-year-old Deepa, currently pursuing her bachelor’s degree in Interior Design, might seem to anyone else as a freewheeling student just like the others at the campus. Yet, this first year student is married and also a mother of a three-year-old boy, shared her ‘balancing act’, which she manages with her work, study and family, with the overwhelmed audience. Pooja Sagar, a student of the organising team, ignited an excogitating debate over the ‘Negative Portrayal of Women in the Media’, stating startling facts and figures over the gender biasness, stereotyping and discrimination. The event also included special videos made by the students on ‘Famous Indian Women’ and ‘International Women’s Day’, along with General Knowledge quiz with gift-hampers that were distributed to the winners. A poem was also recited by Nida Sohail, another student of the team and songs sung by Natasha Raphael, Karen Monteiro; students of the organising team, along with the others, to entertain the audience. Beautiful floral reddish-brown patterns adorned the hands of the visitors, as Heena was also a part of the celebrations of the colourful event. The event was brought to an end with an enthralling Karaoke performance; live on-stage, by the Manipal Band leaving the audience humming the songs of Womanhood in their minds.
-Fatima Husain
Posted by MANIPAL DUBAI BLOG at 1:54 PM