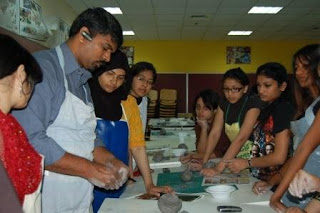 Mr. Sandeep Manchekar instructing the students at the workshop
William Shakespeare once said: “My thoughts are whirled like a potter’s wheel; I know neither where I am nor what I do”. But, the ‘Master Potter’ who visited Manipal University, Dubai, knew exactly where he was and what he was up to! Mr. Sandeep Manchekar, a Mumbai-based practising studio potter, who has also organised several proficiency training workshops for potters and students in various schools and colleges around India, was present at the 4-day long Pottery workshop, organised by the Department of Interior Design, at the Manipal University Dubai. The workshop was divided into two phases; for Beginners and the latter for Advanced Level, March 22-23 for beginners and March 25-26 for Advanced level, ending with a certificate distribution programme on the last day of the event. The first day of the Pottery Workshop began with a presentation by Mr. Sandeep Manchekar, at the Manipal Auditorium. Images were used along with text to demonstrate the technique of moulding clay into various art forms. After a basic run-through of the whole process of a ‘making and baking’ various objects, the first, second and final year students were divided into batches that were allotted separate classes – for it was finally time to get their hands into action! 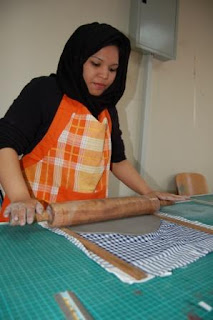 Rolling the clay to soften it
Later in the day, when the workshop began, the students, who were divided into various classes, stop before tables, with the materials before them – all very excited to start the-play-with-clay! While the juniors learnt and practised the ‘coil method’ and various ways to make objects using pebble-sized clay-balls, the seniors studied the more complex method of shaping clay into comparatively bigger objects, like tall, cylindrical vases. As the students were moulding pieces of their imagination on to clay, Mr. Sandeep Manchekar, along with the other members of the faculty, including Ms. Indira Bharve, and Mr. Ashok Iyer, the Chairperson of the Department, were busy providing assistance and demonstrations to the students on the pottery techniques and clearing doubts. 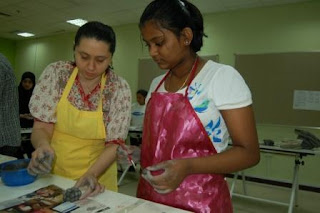 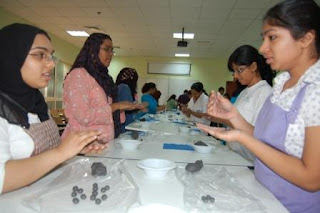 Hands in action. ID students working with clay The second day of the Beginners’ workshop resulted in switching lessons; the juniors now practiced what the seniors did and vice-versa! While the basic material for any pottery workshop; clay, was imported from India, the Department of Interior Design was well-equipped with a potter’s wheel that ran on electricity (an ‘e-version’ of the traditional potter’s wheel!) and an oven, ready to ‘heat-up’ the pots! 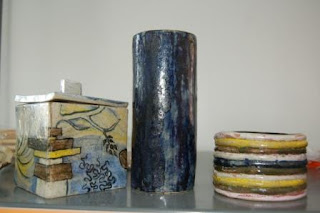 This is how the finished products appear
The beginners’ workshop was then followed by the advanced workshop, which resulted in the more ‘elevated’ techniques of pottery; including glazing, firing and painting objects and ‘throwing’ on the whirling potter’s wheel! -Fatima Husain
Posted by MANIPAL DUBAI BLOG at 1:49 PM