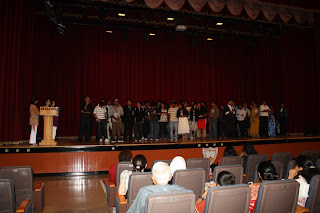 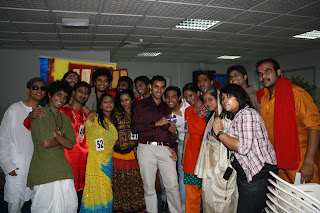 As Alfred Hitchcock’s famous saying goes, “Drama is life with the dull bits cut out” and the Spring Fiesta Drama Competition 2009 was far from being dull. With four colleges performing to win the award, the evening could be called anything but boring. The event that was held at the Sheikh Rashid Auditorium on April 11, 2009 began at 6 pm and as the curtains rose, silence fell. It certainly isn’t easy to perform on stage with the audience intently gazing at you and the judges ready to note down any of the flaws. However Manipal University not only participated in this competition but also were successful in bagging the first position. They competed against the American University of Dubai, BITS Pilani Dubai and London City College and emerged as the winners of the Spring Fiesta inter-college drama competition. Their play revolved around the bollywood theme of two brothers, separated at birth, falling in love with a village belle who has split personality. The play was humorous and full of punch lines that had the audience in splits and made tears of laughter roll down their cheeks. Add to that a few goons, a witch doctor and a song dance sequence and you could not make it any more entertaining. Not only was it a well written script, but the performance of all the actors was indeed quite praiseworthy. The sets and the costumes brought the stage to life along with the lighting and the impeccable timing of the sound effects. Needless to say, their painstaking efforts did not go in vain. Five weeks of grueling practice sessions coupled with a whole lot of dedication did seem to bear fruit after all. Ashwin Dsouza and Aakanksha Singh also won the awards for the Best Actor and Actress. This win has added another feather in Manipal’s cap and we congratulate all the winners. The Cast:- Aakanksha Singh Yohaan D'monte Ashwin Dsouza Anandha Kumar Aamir Ashraff Geet Kandya Prakash Adtani Vishal Joshi Rahul Radhakrishnan Jessina Murtaza Ramya Chidambaran Joshua Johnson Lighting and Sound Muaz Shabandri Thomas James Faizal 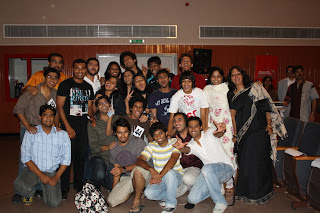