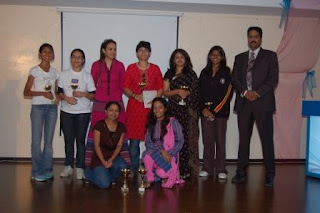 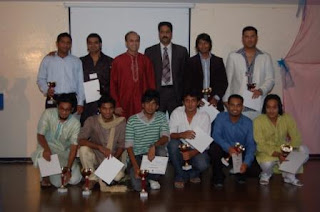 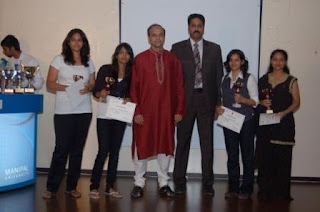 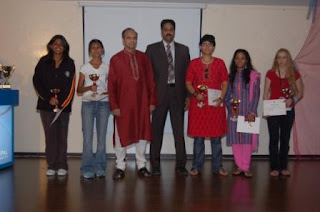 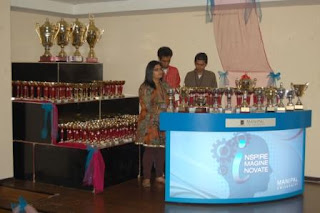 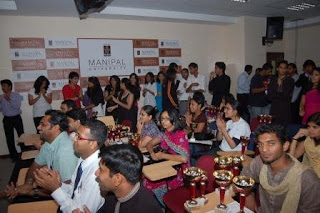 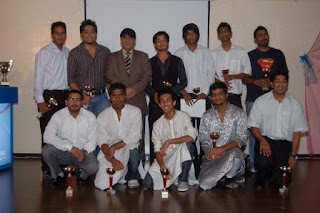 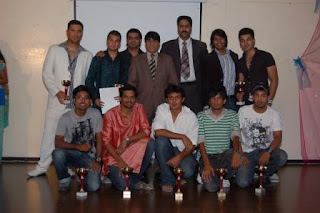 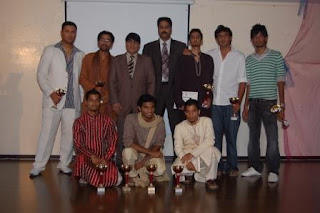 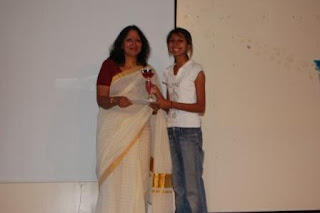 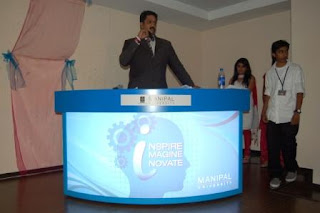 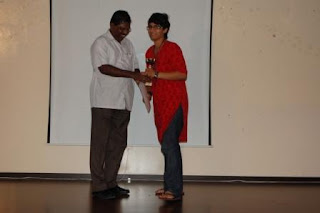 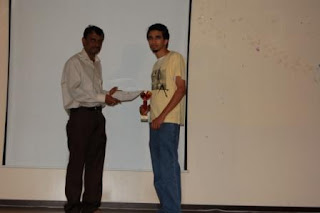 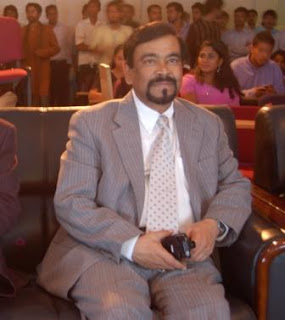 Dr. Ramjee at the event 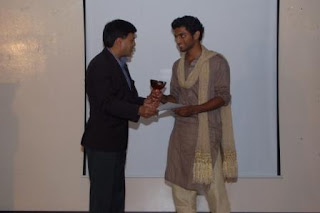 Dr. Md. Firoz at the ceremony 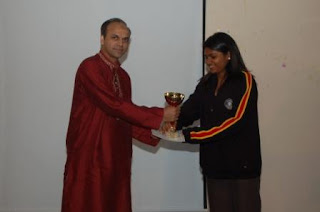 Dr. Firdos Alam at the awards
Around 95 shimmering trophies occupied a larger part of the stage, while on the other side, an excited audience roared and cheered for the winners. Such was the sight at the Sports Awards Distribution ceremony in the Auditorium in Manipal University, Dubai Campus, on May 14, 2009. Though humidity prevailed over the Campus outside, the Auditorium inside seemed vey cosy and ‘cool’ with dim spotlights illuminating the stage though excited eyeballs glared at the stage. The Awards ceremony began with the recitation of the Holy Quran and then declared open my Mr. N. C. Krishna Kumar, the Sports In-charge/ Coach of Manipal University, Dubai Campus. The various awards that were distributed to the students included both Intra-college and Inter-college events. The Intra-college events included: Field events (Discuss, Javelin, Short put) and Track Events (races ranging from 3000 metres, 1000 metres, 400 metres to 100 metres), for both boys and girls. The Inter-college prizes were distributed for the awards given out to the various students for the spectacular performances while competing with other universities. The various sports competitions included: BITS-Pilani (Basketball, throw ball, volleyball, table-tennis, badminton, and cricket), Skyline University College (Table-tennis, badminton and basketball) and American University of Dubai (Tabletennis and Badmintoon), for the sportive boys and girls. 6 scholarships were awarded by Dr. B. Ramjee to meritorious students in recognition of their contribution towards sports: Vikram Naik (BBA) 20% for his contribution and achievement in Cricket, Roshny Ravindran (Media) 15% an all-rounder, Dimple Bhagchandani (MBA) 15%, Joana Marie Dias (BBA) 15%, Rabiya Sonde (Media) 10% and Rahul Kumar (BBA) 10%. In addition to this, Klarissa Crasto (BBA) and Mariam Naqui (ID) bagged the Emerging Sportswomen’s Awards. Other awards included: Best Sportswomen: Nidhi (BBA) Outstanding Sportswomen: Joana (BBA) Emerging Sportsperson: Nigel Rodriguez (BBA) Outstanding Contribution: Asif Anwar (BBA) Outstanding Cricketer: Vikram Nayak (BBA) Best all Rounder: Roshny Ravindran & Glickson (BBA) “I worked very hard for every game and I feel so happy today that I been awarded for my hard work!” exclaims Roshny Ravindran, the Best All-Rounder award winner at the event.
Posted by Fatima Husain
Posted by MANIPAL DUBAI BLOG at 9:43 PM