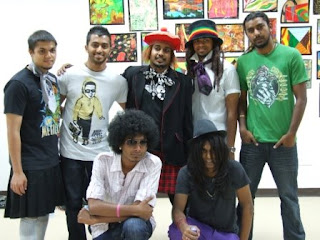 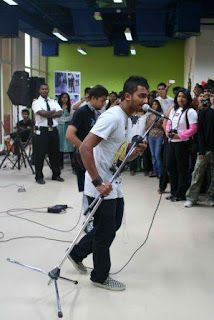 Heavy drums rolling, electric guitars stringing and heavy voices roaring into the microphones: these sounds echoed against the walls of the room as the audience indulged in ‘Head banging’ and tapping their feet to the sound of loud Rock and Metal music. Yes, it is a Rock Concert that I am talking off, but, one of its kind. The ‘Band Fusion’ provided a common podium to a medley of bands performing from various Universities at the Dubai International Academic City (DIAC), in the premises of the Recreation Room (in Block 6) on May 14th 2009 between 11.30 am to 4 pm. The event was organised as a promotional campaign to bring into the attention, of the many Universities present in the grounds of the ‘City’, the Student Hub – a student community, by the students and for the students, though head by the DIAC as well as to publicise the newly inaugurated ‘Recreation Room’. ‘With the success of this event we look forward to more such events like, concerts, desert safari, more DJ parties, fashion shows and so forth in order to explore the hidden talents of our students in DIAC. Student hub has prepared a whole list of events and activities for students lined up for the whole year.’ said Ms. Shazadi Durrani, Student Services Event department of DIAC Student Hub. 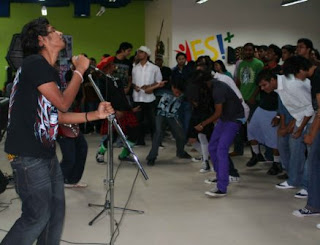 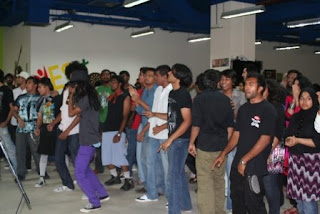 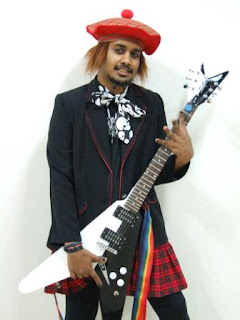 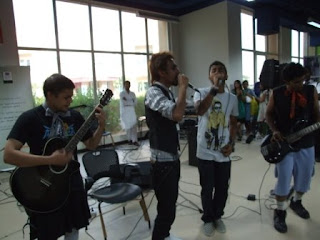 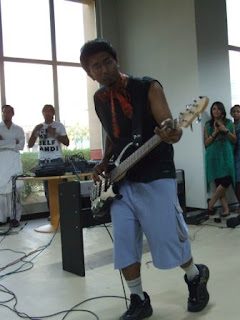 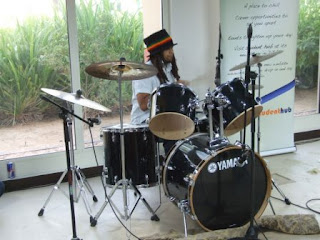 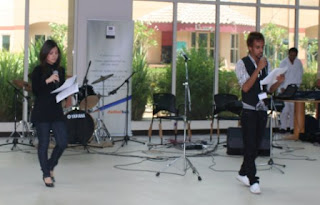 Band Fusion Hosts Sarosh Ahmed and Meherina Chougle
More than 400 people, including students, faculty and members of the Student Hub, were part of the excited audience who rocked to the sound of every beat to the tunes of the music. ‘This event has been a success and we must have it again. Only next year we will hold it earlier, as being the end of the year students were tied up with exams, travelling and holidays.’ said Mr. Hassan Al Kaf, Administrator to DIAC. Serving as an icebreaker, the Band Fusion featured a DJ dance party and a special session of a 15-minutes long Stand-up Comedy act, adding more fun and frolic to the musical event. Mr. Sedias Gope, student from Manipal University flaunted his ‘natural’ ability to make people laugh. “I LOVE to entertain; I’ve been doing this since high school and I’ve never stopped since then!” said Gope, adding that his inspiration comes from his family, whom he tags as “jokers”. From amongst the 10 bands that performed at the event, 5 bands were from BITS-Pilani (HORN OK plz, Valkyrie, Indian Kings, CAD and Inverse), 3 bands from Manipal University (Rock-a-doodle-doo, Nafs and Marbles) and 1 band from University of Wollongong in Dubai (Chain Reaction) and Herriot Watt (69). “Band Fusion is an amazing and a great way to get colleges together. I enjoyed every minute of it!” exclaimed, Mrs. Uma Prasad, the Students Services Coordinator at Manipal University, DIAC. Though all the bands were special to the event and gave their best in the event a huge hit among the varied and enthusiastic audiences, there was another unique thing about the bands – amongst the groups of Rock Bands that performed, there existed a Chic band or a Girl Band! Valkyrie; as the girl band was named, was formed by a group of four girls Payal Yadav (on the bass), Urvi Sharmna (on the keyboard), Helen Gleeda (the guitarist and Nikita Swaminadhan (on the Vocals) and Benjamin (Drummer) the sole boy in the band who also took the responsibility of Band Manager. ‘This event has given us a platform for talent as the Valkyrie’s are playing outside college in front of a huge audience for the very first time and moreover the Student Hub is giving us an opportunity to share the love of music.’, said Payal Yadav. If loud screams and head-banging drained the energy out of the audience, free cans of Red Bull were distributed to ‘recharge’ those who were tired. Gift vouchers from support sponsors such as Aldo and Spring were given out in a lucky draw to students who registered for the grandiose event.
Posted by Fatima Husain and Megna Kalvani
photo credits: Kaahini Vyas and Radhika Krishnan
Posted by MANIPAL DUBAI BLOG at 9:52 AM