Home » Dept. of Media » Break a Leg with the TheatreWallas

Break a Leg with the TheatreWallas 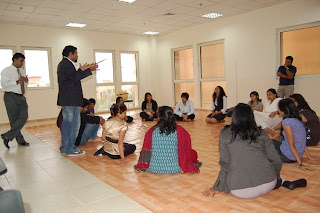 Constructing a story together 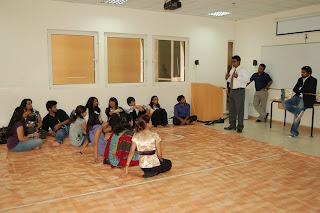 Explaining the essence of Theatre
On the second day of Spectrum ’09, one of the workshops that took place was the Theatre Workshop.
It was conducted by Mr. Prakash Suri, a Professional Theatre Artist from Mumbai who has now formed a group in Dubai called the TheatreWallas. Along with him was Mr. Kalyan from Pure Magic Events and Mr. Kaushik who is Creative Director at The Chase Advertising. The workshop kick started with the introduction of each participant. During this session, Mr. Suri pointed out to the participants on how should stand when on stage, with the right posture and the right eye contact.
Have you ever wondered why it is that people tend to forget their lines when on stage? Well, this is mostly because the audience’s reactions often affect or rather distract the attention of the performer during the performance.
After the introduction session, the next lesson was to understand what exactly Theatre is. Theatre is a medium to communicate and express art forms or a message, through various forms of expressions. It is a serious business indeed.
One wrong expression for a scene, and unknowingly the wrong message could be sent out. To understand this better, the participants were asked to practice mirror acting. Groups were formed where all the group members would imitate the expressions and actions of one person. Following this exercise, the next one was on concentration. Concentration on the essence of the character is of the utmost importance. Here, a number game was played to increase the concentration of the players.
Slowly the participants learned about the efforts that go into Theatre, what a story is, and what goes into making one. But to understand this, another exercise was conducted where all participants sat around in a wide circle and they created a story together, with each person adding on a scene one by one.
Next, they played a game where they were then made to sit in a circle and an object was placed in the centre. The participants were asked to imagine that object as something else. Here, a stick was placed in the centre, and the participants let their imagination run wild. Some of them imagined it to be a earring, a gear of a car, a cigarette, etc. Later they had a similar exercise using a chair as well.
Lunch break was announced at 12 PM, after which everyone gathered back an hour later. Post the lunch break, the participants were divided into groups of three, where they were made to enact something known as the ‘postcard picture’. This exercise required them to make the audience picture a scene or a location, without the use of any dialogues. Some groups enacted a site of a murder, some a church and others the atmosphere of tension outside an interview room. As the concluding exercise, the last exercise required the three groups to organize a small drama. The three experts emphasized on the importance of using stage space, the importance of expression and clarity and sound modulation. Taking these factors into consideration, the groups presented their drama as a grand finale to an interesting and enlightening workshop.
Posted by Saira Kasim
Posted by MANIPAL DUBAI BLOG at 9:16 AM