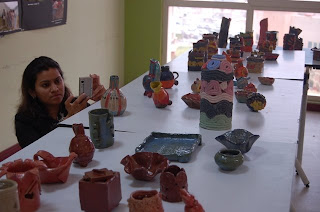 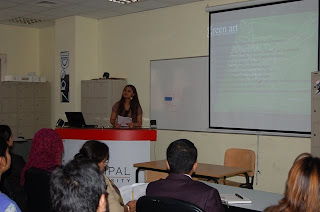 Neelanchana Shobhakumar talking about the impact of Museums on the Social Order (photo credits: Saira Kasim) 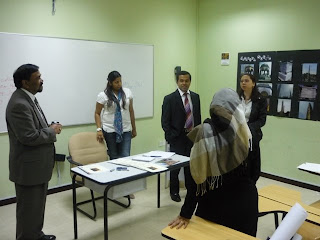 Dr. Ramji viewing the Photography Exhibition (photo credits: Elham H. and Vaishali K)
On the 17th and 18th of May 2009, the Department of Interior Design held IDeaZ, an annual event held by the Department of Interior Design, for the second year in a row. The event took place from 9:30 AM, and ended by 3:45 PM. As a part of the first day of the event, there were four presentations by the students of M.A. Interior Design, where each student spoke for an hour each. Persented by Neelanchana Shobhakumar, the first topic was “A study on the impact of Museums on the Social Order: Conceptualizing a Green Museum for Dubai”. We have become so accustomed to the classical museum, that we don’t pay attention to the architecture of any museum at all. Neelanchana spoke about how an architect’s desire can be resolved to create something so spectacular that it can actually overwhelm Art. Next up was Sherrin Samuel, who spoke about the “Study of Hotels with respect to the Sustainable Facet for its Commercial Spaces”. 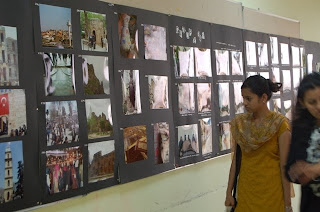 The Photography Exhibition (photo credits: Saira Kasim)
The lunch break was from 12:45 PM till 1:45 PM, after which Jesni Abdul Quder spoke about “Emotional and Physiological effect of Curvilinear Forms”. The last speaker for the day was Fouzia Al R., who spoke about “The significant need for a Mosque and Islamic Centre for Women in the Contemporary Muslim Society”. 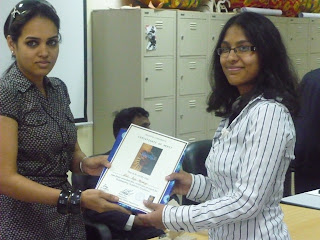 M.A. Interior Design student Nivi awarded for Academic Performance (Photo credits: Elham H. and Vaishali K.)
Once the presentations were done, it was the Prize Distribution session, where the students were awarded Certificates of Merit for their performance and achievements throughout the year. 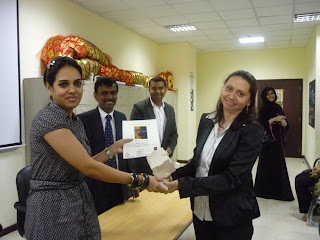 Email ThisBlogThis!Share to TwitterShare to FacebookShare to Pinterest
Labels: Dept. of Interior Design