Home » Student Speak » Beyond the books and the strings

Beyond the books and the strings

University life is a time where human emotions tend to grab hold of the artistic throat of individuals and experimentation with various art forms tends to be the de rigeur of students from freshmen to sophomore to seniors. College days tend to produce bands as there is a mélange of rebellion and independence. This volatile cocktail produces great musical outlets when infused with talent, from bands of yester-years to modern day bands like ‘All American Rejects’. Around the world, students get together and live out their rock star fantasies. Dubai acts as a modern society and among the poser bands one finds genuine musicians. One such band is the Manipal College band aptly named ‘Forsaken’. Another prominent one belongs to American University of Sharjah, which tends to be the forerunner in the local underground band scene. 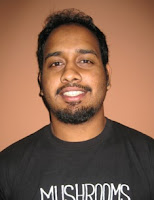 Zakk Victoria
Photo credits : Disha Laungani
Reflecting the eclectic mix of Dubai bands from all genres, there are bands with ambiguous names such as Gandhi’s cookbook (punk rock) and the graveyard sounding ‘Beneath the remains’ (metal). “Music has always been with me and it’s obvious that I would bring it to college”, says Zakk Victoria, the bassist for the Manipal band ‘Forsaken’. Music has always thrived on the disenchantment of youth and college life with its collage of emotional drama providing the ideal base for the sprouting of talent and innovation. Miniscule cellars acting as a stage have been the norm for such individuals. “When I practice, the troubles and stage fright become just words. Regardless of the arena, the music makes me comfortable”, says Aliston, the lead singer of the ‘Forsaken’. Topics as diverse as death and wanting are covered on the howls, screeches and hymns of the college bands. This reflects their temperament which has been since Monks played in Monasteries and will be till the notion of individual thought becomes obsolete.
By Keegan Pereira
Posted by MANIPAL DUBAI BLOG at 12:05 PM