While the rest of us prefer to spend our evenings indoor, the Manipal cricket team prefers to be more productive. Had you passed by the Al Majd English School on the 9th and 10th of September you would have undoubtedly heard the unmistakable sound of willow on leather. It was the sound of Manipal’s finest gearing up for the upcoming season. 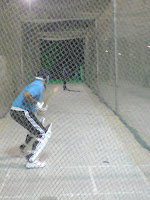 [ The coach shows them how its done ]
Photo credits : Jeraz Pastakia
Under the watchful eye of former UAE cricketer Kaizad Ankelsaria, the team hopes to hit new heights this year, especially since the turnout for the vacant spots in the team has overwhelmed both the coach and newly appointed captain, Nigel. The weight of responsibility on their shoulder is heavy as they have to pick players to replace cogs in what used to be a well oiled machine. There’s no reason to panic though as returning players include many of the heavyweights that have guided Manipal to several victories over the last few years including Vinay Mehta and Stefan Monteiro.
The tryouts included everything from fielding drills to batting and bowling practice. It began with a team huddle and words of encouragement from Mr. Krishnakumar and the Captain. The fielding tryouts were particularly impressive to behold as mistakes by fielders were few and far between. That certainly does not bode well for any future opposition. The greatest element of the tryouts was the way in which team spirit seemed to develop within hours as players got to know each other and the serious and grim workout became a fun filled affair with some friendly heckling, a few words of encouragement and a whole lot of adrenaline pumping action.
For their part the freshmen infuse the team with new life as the fielding is certain to improve and players who are eager to impress will definitely never let up on the opposition. Two players that really caught the eye were Brendon and Umer from the Department of Inter Design and the Foundation course respectively, the former being a lanky fast bowler and the latter a classy and elegant middle order batsman. 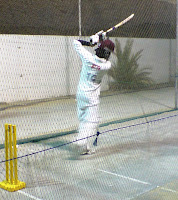 [ In the nets ]
Photo credits : Jeraz Pastakia
Thus once again it seems that come the start of the new cricket season Manipal will be a team to be reckoned with. The team already has a strong foundation and the freshmen will definitely add that extra energy needed to go the whole nine yards or in this case chase down a couple of hundred runs. So here’s wishing them luck for all their upcoming endeavors.

By Amartojit Basu
Posted by MANIPAL DUBAI BLOG at 11:27 AM