The Nobel Peace Prize is not won by ordinary people. It is won by the people who have extended their hearts and hands beyond the pull of their own lives and have put in extraordinary efforts into ‘saving the world’ as one might put it. Started and named after Alfred Nobel, an author, inventor and pacifist amongst other things, this award has been won by the likes of Mother Teresa, Yasseer Arafat, Mikhail Gorbachev and of late (and early as!) Barack Obama!

The point of this award is to felicitate those who truly work towards world peace. It has honored the Red Cross committee three times by now and also the Office of United Nations High Commissioner for Refugees twice which explains rather substantially the reasons for Obama’s victory.

The crown has its own long tale of struggle as he is considered perhaps the only World Leader to have made the most honest and conscious efforts in his power in bringing the Arab and Western World together. Obama has his own personal tale of struggle and hence that makes him into just the ‘perfect man’ for a job that requires in-depth insight and conscientious effort.

While working towards ‘hope’, as his campaign tagline went, signaling a better future for the world, his diplomatic efforts are in tightening world gaps based on common value system, which certainly must have roots somewhere in his own personal difficulties and upbringing and his viewpoints on the world, as a result of it. 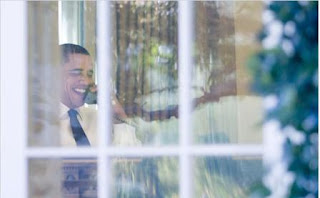 [Barack Obama being informed of his victory over the phone.
Picture courtesy: www.nytimes.com]

The glory of this victory is such that his efforts are being highlighted in the most traumatized part of the world, as a result of American bombing, Hiroshima and Nagaski and people cheer ‘we hope he will bring us a better future’ and ‘he is the right man for the job’.

As Mr. Hersy a Kenyan cab driver in Indianapolis said ‘he is an intelligent man’ which wasn’t being said because he is from Harvard but because he has got real intelligence which is incomparable to the world’s average intelligence.