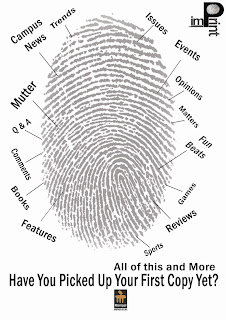 As a final project of the 5th semester, the students of the Print Media in B.A Media and Communications launched a compact newspaper called ImPrint on October 15, 2009. Through this project, we intend to leave our mark as print students before graduating and so, after much brainstorming, agreed on calling the newspaper ‘Imprint’. Megna Kalvani, a fellow student, sheds light on this choice, “We decided on the name Imprint because when separated, the word reads ‘I Am Print’ which symbolizes us, the print students.”

Like every newspaper, this one too has a design team, editors, sub-editors, reporters and photographers. All of us will get a chance at experiencing each of these roles.

A proposal was presented to Dr. Md. Firoz, Head of the Media and Communication Department regarding the project at hand. “I am very delighted to learn that the students of Print Media Specialization are finally coming out with the weekly compact newspaper. I was present for the presentation made by the students and I think that the entire idea is original and innovative. The effort being put in by them is quite laudable,” he said.

The newspaper design is the creative genius of five of our classmates, who volunteered to undertake the challenging task. They were guided by Mr. Sabir Haque, a senior lecturer with the Media department and the Design Coordinator for Imprint. “Very few people today get a chance to speak out their mind. Imprint will give that freedom to the students which they will seldom find outside. Cherish it and let’s try to keep it alive,” he stated.

A lot of creativity and experimentation has gone into the designing of every page. Almost five different logos were designed of which we finally chose a thumb impression as our logo. Blassy Boben, a member of the designing team, announces with pride, “We contemplated reusing the layout of an existing newspaper, but we decided to start from scratch. Now the style is truly ours.”

With great pride we also bring to you ‘Mutter’, our very own comic strip created by Zaheen Hussain, the in-house comic artist. “Think of Ms. Mutter as a combination of Cleopatra and Hillary Clinton,” he says with a grin. Catch the witty Ms. Mutter as she sets out on adventures along with her friends.

Ms. H.S. Shubha, the faculty in charge of the project, is anticipating our newspaper as much as we are. “I am very hopeful that this kind of project will give the students an idea about running a newspaper but on the other hand I am also very anxious. I hope that it will be well accepted and worth the effort put into it,” she says expectantly.

The newspaper is targeted at the students of the Manipal University, Dubai Campus and will be circulated within the university premises. So do remember to pick up a copy of Imprint every Thursday for the next eight weeks and stay updated with the latest in campus news. You can share your creativity with us in the form of poems, artwork or anything else. Your feedback is important to us and suggestions can be sent to feedback.imprint@gmail.com