Manipal University organized its 8th blood donation campaign last week on the 19th and 20th of October, 2009. The campaign titled ‘Your Blood Is Mine: Donate Voluntarily’ is the latest one launched by Dubai Health Authority’s Blood Donation Centre at Al Wasl Hospital. It aims to encourage blood donation in a bid to help people suffering from every type of blood-related diseases.

Volunteering for a Cause

The two day campaign was held at the University’s auditorium where students from all around DIAC came to donate blood. It was undertaken by the Biotechnology Department of the University and had students from the department volunteering to help the donors. Ms Renuka Seenivasan, the faculty from the Biotechnology Department in charge for the campaign, said “Every semester approximately 150 bottles of blood are collected. This semester too, more than 145 bottles were   collected.”

Every individual was required to donate 450ml of blood and had to undergo a small health check-up. Many students were rejected because they were either underweight or their haemoglobin level ranked low. “An individual must weigh more than 50kgs and the haemoglobin level should be between 12.5-15 for women and 13.5-18 for men,” explained Dr. Rena from Dubai Health Authority, who was present at the venue. “About 60-70% of the collection goes to Thalassemia centres. The remaining is used in the cases of accidents, Leukaemia and so on,” she further informed.

“The blood collected is sent to the blood bank laboratory to be screened for Hepatitis A, B, C; HIV, Syphilis and other diseases,” explained Deby dela Cruz Augustin, a representative from Al Wasl Hospital.

Many students were enthusiastic about extending their hand for such a noble cause. One of them was Aman A. John, a student of Manipal University, who is a regular donor. “By donating blood, I’m helping in the regeneration of new blood cells in my body. It not only helps myself but also helps save someone else in need,” he said.

While many were accepted, some faced rejection. “I was able to donate blood last year but this year my blood count did not meet the requirement,” said Mereena George, who was not allowed to donate.

There were, however, some who did not wish to donate blood. “Being a regular smoker, my blood contains high levels of nicotine and I do not want to pass it to someone in need of blood. Therefore I refrain from donating blood,” said a student who wished to remain anonymous.

During the campaign, volunteers were seen helping out with the registration, answering queries of students and providing snacks and drinks to donors. Farha Shaikh, a volunteer for the campaign explained, “We are here to help people feel safe. We convince them that donating blood is not a dangerous procedure and that food and drinks are provided to help them regain their strength.”

Dr. Rena also explained that the reasons for not donating blood could either be physical or psychological. “80% of the reason why people do not donate blood is psychological. A lot of people have fear of needles or cannot stand the sight of blood,” she said.

Donating blood is not harmful; in fact it benefits the health in many ways. Besides replenishing the blood, it activates the bone marrow to produce fresh blood cells, reduces blood pressure and blood cholesterol levels and activates heart muscles and circulation resulting in reduced risks of heart attacks. Donating blood is not only safe and simple but it also saves lives. 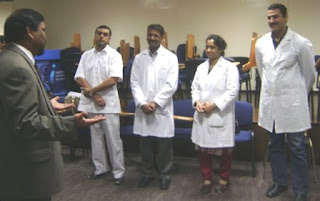 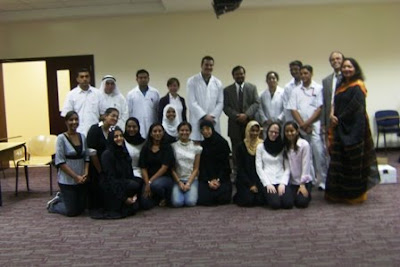 - By Rabiya Sonde and Aneesha Sudir

Did you know that every 2 seconds someone in the USA needs blood. We should be aware of being a blood donor and help to save lives. We should be a donor especially holiday is coming and accidents happen. Anyway, I found a ton of good information on the blood donation process and where to donate here at http://bloodbanker.com