Manipal’s finest were at it again with a sensational victory against IITM Dubai. Following their spectacular victory against Canadian University, our college roped in another victory in splendid fashion. It was once again a collective team effort that ensured victory. IITM came close but Manipal never let them grasp control of the match.
Batting first, Manipal University put on 161 for 5 in their 20 overs. Two innings that stood out were that off Surinder (36) and Captain Nigel (40). The rest of the players got into double figures as well but once again could not capitalise on their starts. The batsmen dominated the IITM bowlers throughout. The run rate for the innings was 8 runs per over, which shows the authority of the batsmen. The only bowler who gave IITM any control was Raul with figures of 22 for 2 from his 4 overs. 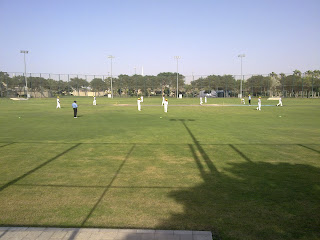 The Vastness of the Field (Photo by Jeraz Pastakia)

When IITM came out to bat, they tried to look positive from the outset. However, two early wickets pegged them onto the back foot. But, a brilliant 50 run partnership between Zeeshan and Junaid gave them some hope. But, they too eventually fell. Once they were out of the way, our bowlers cleaned up the rest of their batting order with ease. Apart from Junaid (51) and Zeeshan (23), there wasn’t a single player in the batting order who reached a double figure score, the next highest score by an individual was 9. Although they ended up with a score of 146/10 in 19 overs, it was largely due to the fact that Manipal gave away 34 wides and 1 no-ball. 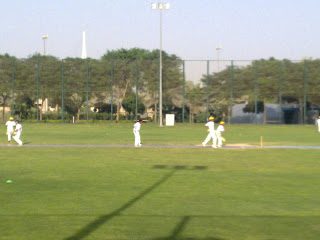 Running Up (Photo by Jeraz Pastakia)

It was yet another resounding victory for Manipal. Captain Nigel Rodriguez was adjudged Man of the Match for his all round performance. He made 40 runs with the bat and had bowling figures of 21 for 2 in his allotted 4 overs which turned out to be a match winning performance. The captain truly led by example in this match.

Manipal University now has perfect record with 2 victories from 2 matches. Their next match is against Middlesex University on 26th of October. If they manage to win that match, they automatically qualify for the semi-finals. With the momentum gained from these 2 victories, and the form that Manipal are currently showing, it should be a cracker of a match.