Manipal’s finest were at it again when they beat the reigning champions, Preston University, in the semi–finals of the Pride Cup ’09 to book a place in the finals. We have shown excellent form throughout the tournament beating every team we’ve faced with ease. We will be going into the finals unbeaten in the tournament.

A huddle for confindence

For the first round we were drawn in Pool 3 along with IITM, Middlesex University and Canadian University. Initially all three teams looked evenly matched but, by the end Manipal gave one dominating performance after the other. The momentum built up during the group stages helped us win the semi-finals in superb fashion by 43 runs. 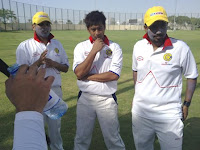 By beating last year’s champions, we have got a huge morale boost. We will now look to go into the finals all guns blazing and come out on top. The finals could be the toughest challenge yet for Manipal but, if they play in the same consistent fashion as they have done for the entire tournament, expect nothing less than an epic victory.

Relaxing before the taxing begins