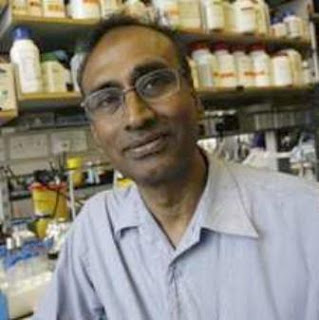 Since Nobel Prizes happen to be the flavour of the month, I thought why not cover the story of an Indian. Afterall these are the stories that brim all of us up with pride. And such stories make more sense too since the tale of someone who was born in Chidambram and moved to California, followed by Ohio University and working himself to the ground while researching “ribosome” is a true Nobel Prize Winner.


Ribosome is integral to fighting bacterial infections.  Hence, one knows why and how he would get the award for doing research in this valuable field. Ramakrishnan has been felicitated along with Thomas Steitz and Israeli Ada Yonath. He had been working at the MRC Laboratory in Cambridge University trying to develop effective antibiotics for the human body. The Swedish Academy of Science decided to honor him because they felt the most important part of the puzzle had been solved for them.

Ribosomes are extremely important protein producing substances which help fight diseases easily.  Ramakrishnan, 57 years old, is a senior scientist who also received a Doctorate in Physics from Ohio University. Infact, when he received the phone call one morning, he thought it was a practical joke and even complimented the other guy on his ‘swedish accent’.

Humbled after receiving such a prestigious award, all this newly awarded nobel laureate could think of was hoping to take such a complicated process forward after working tirelessly on building an ‘atomic picture’ using X-ray crystallography.

For those who don’t know, the Nobel award was initiated by Alfred Nobel, the inventor of dynamite and that Mr. Ramakrishnan would also win a 1.4 million dollar purse, accompanied with a gold medal and a diploma.

As per the report on www.news.rediff.com, he was so consumed by his passion for science that he accepted a massive pay cut and moved to the all-paid for laboratories at University of Utah. Nicknamed as ‘Venki’ , Dana Carroll , former chair of biochemistry and professor said ‘Venki cared more for the science’ which is clearly seen in his quotation ‘It’s all about loving research enough to make it your life mission’.

Upon his Indian roots, this US citizen says ‘I think it would have been difficult to do my research’ because ribosome research involves use of synchroton x-rays as he also remarks 'my Indian colleagues who use that technique have to travel to France or Japan, and that makes it much more difficult.’  Having said this, Venki is not too outdated on his knowledge over research levels in India either because he remarks ‘think there are not many problems now in terms of research being done in India -- it is only a matter of people wanting to do it.’

His kind eyes and humble smile speak a lot about his personality. His other passion was Carnatic music. Whenever he managed to get some time, he would make it a point to attend a music show. There have been several times when his students have accompanied him on such shows.

Nothing has been left aside to congratulate him on his victory as even vice-chancellor of GU Pramal Trivedi told times of India “Gujarat  will always take pride in the fact that Venkatraman studied in MS University in Vadodara,’ which explains more than enough about the length and breadth of his pride.