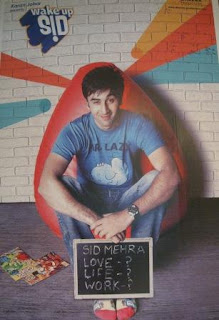 “Wake Up Sid" is a comedy film about an unmotivated college boy who takes life for granted, until he faces some difficulties in life.  Sid (Ranbir Kapoor), is the focal character who studies less and prefers leading an easy life. His priorities are his friends - his camera, his car, his X-box 360. He also enjoys his mother's unconditional love and all of life's luxuries, courtesy of his wealthy father but has no direction in life whatsoever.

Belonging to this generation, many of us are in the same boat where we have no aims in life and tend to treat it like a bed of roses.  Many students enter college without any goals in and till the end have the same mindset that they began their university life with. In a way, we all resemble Sid- the carefree and a non ambitious being.  Even after many of us graduate, we still seem to be in search of an aim

“I myself have no special goal in life, and am very inconsiderate towards the feelings of my parents. I do not want to think about my future right now as I am enjoying college to the fullest, but after watching the movie, I think life isn’t what we think it always is and someday we need to get serious. And it would be better if I do it as soon as possible.” Says Megha, 21 year old, college student.

[Megha, the 21 year old in search of an aim. Photo  Unzeela]


Sid realizes his responsibilities towards life and parents after his failure in college which breaks him down and forces him out of home. This makes him struggle later on, for his dignity and also to make him financially stable. The movie continues to inspire us till the end of it by giving us a glimpse into Sid’s life and yet reflecting the mindset of many youngsters. It brings us back to reality wherein it’s better to change our attitude towards life and dream of a better as early as possible before it becomes too late. 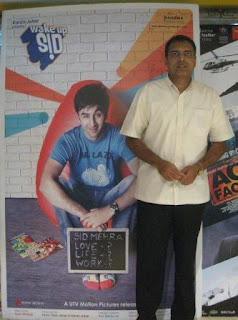 
When asked to a parent about their concerns of their children, Mr. Hassan said “I am a father of two boys studying in high school. I would definitely not force them into doing what they wouldn’t like to do but then they have to know the basic realities of life and should have a proper mindset about their future before it gets too late.”
Sid could not adjust himself to a strict environment of a formal office. He longed for something that would define himself that is an independent and a fun character. This is why he was more comfortable and excited about his job as an assistant photographer. The movie preaches in a rather unique way how being carefree can be the one way ticket to a ruined career.

Wake up Sid is a realistic movie and keeps its audience hooked till the end. It has many heart warming scenes that relate to both the youth and the adults. A must see for those who seek entertainment amongst life’s lessons.

Email ThisBlogThis!Share to TwitterShare to FacebookShare to Pinterest
Labels: Reviews