Home » »Unlabelled » Back Into the Spotlight

Back Into the Spotlight

Last year, a Film and Drama Club was established at the Manipal University to provide students with a chance to build upon their theatrical abilities.

“Through the Film and Drama Club, we are trying to create an environment where creativity will get a right perspective and a chance to flourish, thereby helping the students to overcome all inhibitions.” said Ms. Fokiya Akhtar, faculty in charge of the Club.

The Club is run extensively by the Department of Media and Communication. It aims to host regular screenings at the university auditorium. The movies lined up span various genres and the club will be organising workshops, seminars and discussion groups pertaining to the performing arts. 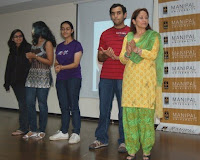 Ms. Fokiya Akhtar with members of the committee.

The movie screenings will be subjected to critique and debate in forthcoming workshops and group sessions. The objectives of the Club are to promote the theatre culture and provide students with a platform to nurture and showcase their theatrical talents. 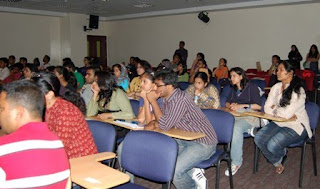 Engrossed in the movie

This year’s edition of the Film and Drama Club took off with a movie screening held on October 22, 2009. The movie chosen was M. Night Shyamalan’s ‘Unbreakable’, a psychological thriller.

Membership to this club is free and open to all students of Manipal. It is however on first-come-first-serve basis and only 100 seats are available.

For registrations, send an email to muazsm@gmail.com.

Posted by MANIPAL DUBAI BLOG at 11:23 AM