The awards ceremony for the eighth Ibda'a Student Awards, hosted by Dubai Media City (DMC) was held on the 19th of November 2009 at the DMC amphitheatre.A glitzy gala dinner honoring creative flair declared the winners of 12 media categories from over 24,000 submissions on a global level, including 170 entries from the U.A.E. Senior government officials and representatives of leading media organizations and academic institutions were among those that attended the event, recognizing outstanding media talent.


The shortlisted candidates for the Ibda’a Awards from overseas were flown to Dubai, where they joined the UAE-based finalists at the grand Midwest Express Hotel Apartments in Discovery Gardens, Dubai. There were immersed in activities which included an exhibition showcasing their works. 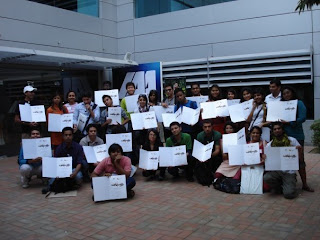 The finalists for the twelve categories


Following is the list of winners in the respective categories:

The award for the 'Best UAE Project' from submissions of the UAE-based university students was presented to Afra Bin Dhaher for her outstanding entry in Digital Photography category. Additionally, Brash FZ LLC awarded an internship to from the UAE for her creative submission.


The Ibda'a Student Awards has established itself as an important platform showcasing young media capabilities to industry professionals thereby helping promote a remarkable interaction between the too.