Home » »Unlabelled » My Experience with IBDA’A 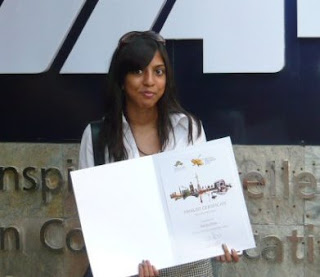 It was exactly three days before the IBDA’A week that I received a phone call, where I was told that I had to move into the hotel apartments. I was shocked and ecstatic at the same time and before I knew it, on the 15th of November, 2009, I was moving into the Grand Midwest Hotel Apartments in Jebel Ali.

By the next morning, 33 out of the 36 shortlisted students were enjoying a delicious buffet breakfast in a spacious dining area in the hotel. Four other students (including myself) were from the U.A.E whilst the rest came from around the world- Singapore, Philippines, Lebanon, India, Pakistan, Egypt etc.At 9:30 there was a gigantic tour bus waiting outside, as all of us excitedly crowded around Noel, the pleasant and patient man who would be our tour guide for the day. We were going to see all of Dubai.We travelled all around the city, making our first stop at the Museum in Bur Dubai and then headed towards one of the oldest Mosques in Jumeirah where everyone stopped to take loads of pictures. Dubai Mall and Dubai Marina were next on the list, topping it off with the beautiful Atlantis that took everyone’s breath away. We were told that we would be one of the last lucky people to see Sammy the shark, as she is finally being released into the wilderness again, where she rightfully belongs, thanks to a Facebook group that petitioned for it. At around 7 we were extremely exhausted and hogging dinner at our hotel again. The food was exceptionally good and consisted of everything from Indian to Oriental. The day ended with a movie at Ibn Batuta Mall with some popcorn to go with.

DAY TWO of IBDA’A started at 9 30 again, as we all made our way to Media City. For most of the students who had never been to Dubai before, Media City was delightful, just seeing the huge names surrounding them on the buildings was an experience by itself. We visited CNBC, where we got to take a tour and see the studio and its workings. Soon after, we got to meet and greet the judges who had evaluated our work and shortlisted us. It was thrilling and nerve wracking all the same, but we topped it off with a nice lunch and received our certificates for being finalists. Part two of the day was a Desert Safari, which was what most of the other students looked forward to as they had never been on one before. There was dune bashing, belly and folk dancing and lots of good food.We made our way home by 10 and prepared for the next day, which was going to be more hectic than ever.

DAY THREE of IBDA’A was a new instalment in the IBDA’A programme as it had never been done before. It was a cruise in the Dubai Marina and boy, were we looking forward to it! There were water activities, music and a BBQ all on the boat. The best part perhaps for me, was lounging on the deck and getting to know all the other contestants. After the cruise, we visited Dubai Media City once again where all the shortlisted students got to see each other’s work at a special exhibition. One of my most proud moments was seeing my work displayed along with the other extremely professional projects. Soon after we had to head to the Amphitheatre for a rehearsal of the Gala Dinner which was the next day. Here we practiced our walk to the stage if we won, and what to do and what not to do. Once everything was finalized, everyone headed back to their hotel rooms to get ready for the big day!

The FINAL DAY of IBDA’A was perhaps the most amazing one! The gala dinner was set to start at 8:00pm, and our limousines- a gift from the IBDA’A Steering Committee Heads, arrived at 6 to take us to the event, help us get press coverage and run through some final details. Soon we were walking in a group to the reception area, where more than 500 guests had already gathered. We took pictures on the red carpet with professional photographers, and captured some of the fondest memories we could ever have.

The Award Ceremony started with the National Anthem and a brief on the IBDA’A awards and what the event would entail. Without any further delay, the chief guests were called on stage to hand out the awards, and one by one the winners were announced. It happened too quickly, and none of us who had won, really expected to win. I guess the experience was more than enough. Pictures were taken of all the winners, once everything was over and all the awards were handed out. The press surrounded all of the winners, as we had coverage from Zee TV, Business 24x7 and other popular news outlets. The night ended with dinner and a blackberry competition where 6 lucky people from the audience won blackberry phones.

IBDA’A was one of the best things to ever happen to me. I am honoured to have won an internship with CNN and look forward to working with them. I want to thank everyone who supported me.