Home » »Unlabelled » No time for afterburners

No time for afterburners

The Dubai Airshow returned to the UAE last week. Taking place between the 15th and 19th of November, the event brought traffic, both on the road and in the air, to a standstill for the greater part of the afternoons.

The airshow was held at the Dubai Airport Expo, in vicinity of the Emirates headquarters. There was a fair amount of excitement amongst aircraft as the F22 Raptor, currently the world’s best fighter plane, made its debut in the Middle East. 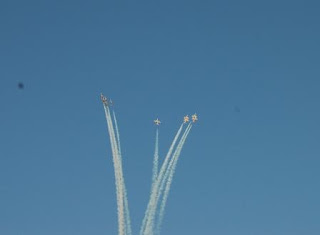 The A380 - The Graceful Giant
Sadly, Dubai Airshow regulars Red Arrows were not present this time. The A380 was present, and its flight display was noted by some to be as graceful as a whale in the sea. The world’s largest plane seemed at home at the airshow. Sporting the Airbus colors, it managed to hold it’s own against Lockheed-Martin’s sleek fighters. 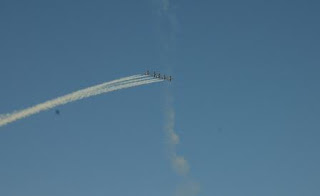 Wowing viewers with acrobats
Although they may have been slightly overshadowed by the more flashy displays, the Eurofighter (Created jointly by France, Germany and Sweden, the air superiority fighter is Europe’s most popular military aircraft), Eurocopter and the US Air force’s E3 Sentry AWACS also enjoyed a fair bit of publicity. The F16 Desert Falcon (a modified version of the vanilla F16 to suit local conditions), long touted as the pride of the UAE military, was also on display.
By Zaheen Hussain