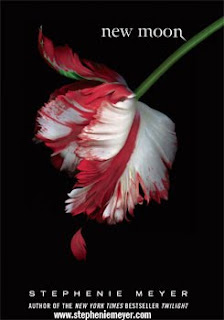 New Moon is the sequel to Stephenie Meyer’s first novel -Twilight.  This novel works well enough as a stand alone but I think that you will get a better understanding of the story from reading it if you have read Twilight first.

New Moon is always going to be compared to Twilight and people who are expecting this novel to be essentially the same as Twilight may be disappointed.  Twilight had an almost dreamy, fairytale quality to the writing, which this story lacks.  The Cullen family of vampires are also absent from a large proportion of New Moon, and vampire fans may keenly feel their absence.

New Moon is narrated in first person by Bella and has an obvious parallel with Shakespeare’s Romeo and Juliet and I mean obvious because even Bella recognises that she is in danger of playing out history’s greatest romantic tragedy.  I think keeping Romeo and Juliet in the forefront of the readers mind, actually helps the author build the tension for the climax of the story because we can all see the tragedy that is waiting to happen.

The pain that Bella feels when Edward abandons her is extremely well written and is really what this story is about.  Most of the things that happen to Bella in New Moon are as a result of the overwhelming loss that she is trying to bear.

For fantasy fans New Moon isn’t all about Bella and her emotional pain.  The rogue vampires Laurent and Victoria return to Forks. The Quileute werewolves are an exciting addition to the story and it will be interesting to see how this plot line is developed in the next novel in this series.

The book focuses on Bella as she tries to come to terms with the loss of her relationship with Edward, and how she finds strength in a new friendship with Jacob Black. Meyer manages to tie themes of relationship issues in with vampires and werewolves as seamlessly here as in the first book.Jacob was my favourite character – and when it became easy to see a love triangle developing I was definitely rooting for him!

The book moves along at a swift pace and sweeps you along with it to the extent that it becomes completely believable that these fantastical characters exist.

Posted by MANIPAL DUBAI BLOG at 12:13 AM