A reviewer writes for those who haven't seen the film, as a kind of consumer guide, and is usually concerned with value. The critic writes for those who have seen the film, as part of a critical dialogue, and is concerned with articulating the film's thematic concerns. Yes very true, the second day Open session based on “Film Criticism and writing reviews for movies was held on Thursday 10th December at 09h30-11h00 at DIFF Young Journalism Award. 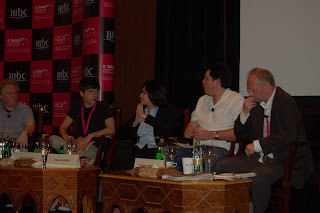 Mr. Collin Brown along with the other speakers set the scene by explaining the difference between critics writing trade reviews for specific titles, and ‘pseudo reviewers’ expressing their views through personal columns, and explored issues relating to subjectivity and objectivity, with critics often working erratic hours and to tight deadlines. He advised aspiring writers to get inside the head of filmmakers, and evaluate films in their specific contexts, and building up good working relationships with publicists was vital.

Later on the discussion took turn towards the social media networking issues and the changing nature of the global market advertising which is vital for the branding of your content or website. Where as Mr. Peter quoted that he himself does not like twitting as it has no money involved in it but it’s the best way to promote the stories as well keep your jobs up.

About writing a review or criticizing a film Mr. James was of the view that a critique should go open minded to watch a film. He himself follows the pattern of writing notes while watching and advised all young journalists to do so. Along with this he tipped the audience about that how today is technology is working it’s very essential to be knowledge based as it can help you to get a job in any leading publications. 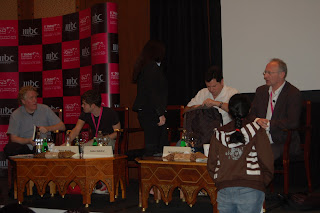 Many queries regarding the threat of newspaper readership going down and how blogging online can be risky was solved at the end of the session. Being students from Print Specialization this was the one of the best session as we came to know the ups and downs of any job and how to tackle with these problems.

This discussion does not only broaden our horizons but also gave us the idea how technology is leading lives of many and how essential is to be knowledge based in today’s world.