Professor Indira Barve of the Interior Design Department attended The MENALAB 2010 workshop from the 30th of January 2010 to 6th of Feb 2010.
Held in Bastakiya, near the Heritage village in Bur Dubai, it was an intensive five-day interdisciplinary laboratory with the intent of discovering dialogues that would help in addressing social, cultural, economic, and environmental issues in Dubai. This was done through the various fields of design; art, architecture, documentaries, fashion, film, photography, storytelling, technology, urbanism, and visual communication.
It was attended by Mishaal al-Gergawi, a member of the Dubai Government's Heritage and Cultural Department and other panelists.
We interviewed Professor Indira to get an inside scoop on how these workshops went about and what was gained out of it:
Q- The theme this year for MENALAB was ‘Designing Change’, could you tell us why this particular theme was chosen?
A- Well, Dubai is a developing city, and is doing so at a rapid pace. It has become a trendsetter for the Middle East. This theme focuses on developing a unique cultural identity for the country, which it currently lacks. It was also intended to come up with designs to accommodate this fast rate of change in the city.
Q- Which workshop did you take part in?
A- There were 8 workshops overall, each with their own topic. I was in workshop 6, which was ‘scripts for 5 days of site analysis’.
Q- Why did you choose this particular workshop?
A- Well, all the workshops were rather interesting, but the theme mostly did not give us concrete findings. All the results were hypothetical. But the site analysis workshop did give us physical results -something that we could see and feel, rather than imagine things.
Q- So what was your workshop about?
A- It was about different ways of documenting a site mainly in terms of culture. A photograph can only capture visuals. So when tourists visit a foreign country and bring back pictures, a lot of details are lost. We tried to find ways in which we could bring back not only sights, but sounds and smells as well. We had a daily routine that we had to follow, as well as certain projects and tasks. For all these projects we used waste material, such as extra wood and bricks from construction sites.
Q- Could you tell us a bit more about these projects?
A- On one of the days, my workshop mates and I, wore baggy bodysuits, transparent sheets (used during medical surgeries) and walked around different parts of the city. This was done to see how receptive the residents of Dubai are. All of us had to choose a certain set of people that we would approach. For example, I chose construction workers. I went up to them and asked them where they felt pain after a hard day’s work. Later on, I would place a pin on the corresponding parts of the bodysuit. At the end of the workshop, we were asked to give these bodysuits in and they were put on display.
We thank Professor Indira for her precious time and for the knowledge she has imparted to all of us.
The MENALAB 2010 workshops provided the participants with interesting insights in various fields. Anyone can register for the 2011 round and their lectures are open to public, so be sure to pay them a visit next year. 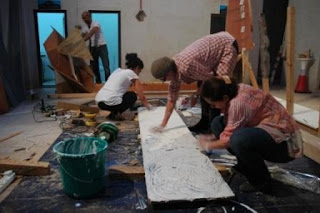 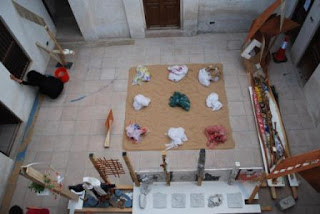 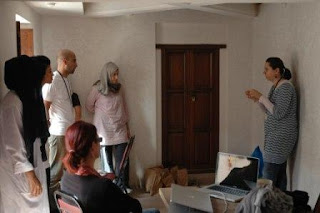