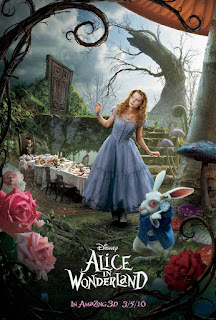 Photo credit: www.allmoviephoto.com
Alice in Wonderland hit the screens in UAE on the 3rd of March 2010 on a wave of hype and excitement for most of the movie goers. It received a mixed response form all the viewers, some excited and a few slightly dejected by the outcome.
Based on the famous story book by Lewis Carroll (this version is directed by Tim Burton, the eccentric filmmaker responsible for The Nightmare before Christmas, Sweeney Todd and several other classics).
The film begins with a quick scene of Alice aged five, serving to establish her father as a stand-in Carroll figure. Then we see twenty-year old Alice taken to a garden party, organized solely to provide her suitor, the smug Lord Hamish, with an opportunity to propose. She flees the proposal without giving an answer, and falls through a rabbit hole, whereupon she is, of course, transported to the surreal landscape of Wonderland.
The film did not live up to the expectations of the audience with mediocre dialogues. There are also efforts made to emulate characters and incidents between the real world and the fantasy somewhat similar to that of The Wizard of Oz. Here the technique is so endlessly repeated and illogical (if Alice had already been to Wonderland as a child, why would she need all these prompts for characters already created?) that it only serves to bore.
Despite the rocky start, Alice gains momentum the minute she tumbles through the rabbit-hole and the audience are set to enjoy the adventurous ride with her, watching her descent in full 3D.
The use of 3D is sparing and powerful throughout the film.
The journey is more mechanical than magical, where even Johnny Depp’s interpretation of the Mad Hatter lacks luster. Only the overwhelming Helena Bonham Carter as the Red Queen will not be trumped, even though her head’s been ballooned in size by CGI. Playing a hysterical evil figure whose monstrosity as a dictator is rooted in female insecurity issues,
All in all the impact that should have been generated, in turn left the audience hugely disappointed.
By Unzeela Usman
Posted by MANIPAL DUBAI BLOG at 12:04 PM