Manipal University sweeps the board at UOWD Public Speaking Cup 2010

The University of Wollongong in Dubai hosted the 5th Annual Wollongong Cup Public Speaking Competition 2010 on the 27th of February to seek out and recognize outstanding orators. Students from various UAE universities demonstrated exceptional oratory skills.
The participating universities were allowed to enter one team of six students from an undergraduate level to participate in six exciting categories, namely- Public Address, Extemporaneous, Impromptu, Radio Address, Storytelling-Traditional and Original.
The panel of judges, comprising of individuals from different fields of specialization, agreed easily that the standard of speaking was high and the decision to choose a winner was undoubtedly tough. 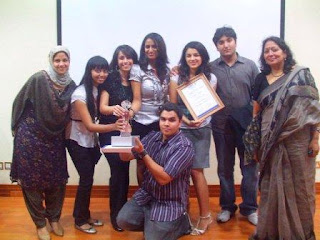 Manipal University Dubai got their first ever Overall Champions Trophy followed by University of Wollongong Dubai coming in at the second place.
The students of Manipal University won in three categories - Radhika Chopra (Engineering Department) got third position in the Impromptu category as she enthralled the audience with her oratory skills, Blassy Boben (Department of Media and Communications) who participated for storytelling traditional, managed to attain the second position by enchanting the audience with her story “The Witches” by Roald Dahl, Mohammad Ali (Department of BBA) swept the judges to a different world with his creative advertisements and catchy jingles securing the first position and Jaseena Yusuf (Department of BBA) achieved the first position for Storytelling original.
“It is a great start for the beginning of the activity-filled semester. In all the future events, in March and April, I just hope and pray that Manipal will lead the way.” said Mrs. Uma Prasad, Manipal University’s Student Services counselor and the team mentor.
The top three winners in each category received trophies and certificates of commendation.


Article and Photo by Aneesha Sudhir (with inputs from Shravani Chatterji)
Posted by MANIPAL DUBAI BLOG at 3:55 PM