The tenth edition of Utsav, Manipal India’s annual inter-college fest concluded recently, with 21 institutions taking part in a variety of cultural events. The fest includes competitions in dance, music, fashion and debate among other categories.

Six chosen students were sent to represent the Dubai campus at Manipal India. Accompanied by Mrs Uma Prasad and Ms Javeria Pasha, Head of Fashion Design, they were an essential part of the festivities came to an end on April 3, 2010. 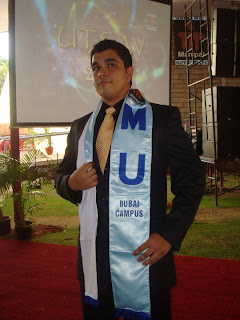 Muhammed Ali representing Manipal Dubai
Hemal Vaya and Muhammad Ali emerged winners in the Debate competition that was keenly competed for. Hemal Vaya participated in the Extempore category as well.

Among the dance competitions, Sanjana Kumar danced away in the Eastern Non- classical dance solo as well as the Western Dance Solo. The Eastern Classical Dance Solo competition was competed for by Sangeetha Mohanan.

Speaking about her experience at Utsav, Roshini Pradeep, says “ The Manipal India Campus is beautiful and I truly felt a sense of belonging. It indeed is a matter of pride that I was chosen to represent the Dubai campus. The event was a lot of fun and was well organized. I am extremely happy that it went  well.” 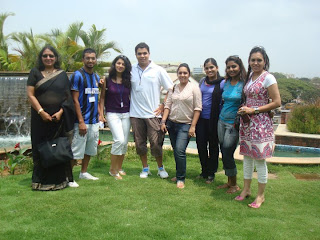 With these six students keeping Manipal Dubai’s name flying high, there is no doubt that we are yet to bring many more laurels to our University.