Home » »Unlabelled » A Peek into the Emirati Culture

A Peek into the Emirati Culture

Bastikiya is a cultural haven for tourists. Located on the Bur Dubai side of the creek, right next to the Dubai museum (Al Fahdi Fort), it is a rather humble little town that traces its origins back 85 years. Few know that the great city of Dubai owes its origins to Bastakiya.  Although mostly reconstructed, it still retains its historic flair and offers a tantalizing glimpse into the city’s past. Tiny shops selling traditional wares such as spices and artwork as well as those with more modern items such as photographs dot the alleys. The ubiquitous wind towers rise above the mostly stubby buildings. A solitary camel stands with its handler, ready to take tourists for a ride. In the center of the town lies an open ground, obviously a spot where traditional dances and plays take place on special occasions 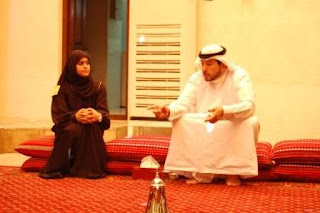 Enlightening the students about the local culture of UAE.

The 3rd year Print Media students of Manipal University visited the Bastakiya on April 7, 2010 along with 4 faculty members of the Media department. We were swiftly ushered into a house with a large courtyard. Later we would come to know that this particular house was the dwelling of the Bastakiya family, a family so eminent that they would give their name to the town. After seating ourselves in a typical majlis style, we were served traditional coffee and dates. A question and answer session then ensued. Mr. Nasif Kayed, general manager of the Sheikh Mohammed Center for Cultural Understanding, along with Ms. Hanan Abdul Aziz answered various questions and enlightened us on diverse subjects such as women's rights in the Middle East, Emirati cuisine and the the pearl diving industry. He shed light on the origin of their National dress, the history of the people of the UAE, and spoke of a world without borders.

All in all, the trip to the Bastakiya was an enriching experience and we express heartfelt gratitude to Mr. Nasif and Ms. Hanan for helping its visitors bridge the cultural gap and for their noble endeavour  of keeping the Emirati tradition and culture alive. 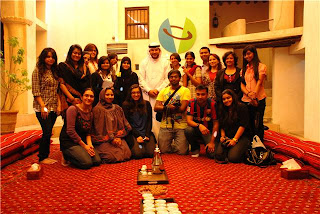