The students of the Advertising and Public Relations specialization from the Department of Media and Communications at Manipal University, Dubai put their efforts together to organize a special awareness event on autism for the students and members of the university.
The event was held on May 3, 2010 and began at 10.00 am with the Quran recitation by Muaz Shabandari followed by the first guest speaker, Ms. Maya Helou, who spoke about the likely symptoms in an autistic child and the ways to deal with these special kids emotionally.
She explained in detail about the communication difficulty that one could face while trying to converse with an autistic child as they do not have eye contact and nor do they respond emotionally.
She told the various strange activities that could differentiate these kids from others like the way they play, the way they experience the world and the various responses that they often attempt to communicate. Factual information about autism was also provided such as one in every 90 children deal with it. Moreover, boys are more likely to have autism than the girls.
Following several other awareness initiatives, more people have begun to come in terms with the disorder. In past, the kids were ignored and thought to be under normal conditions but as and when the word started spreading people are now aware of it.
Ms. Helou also gave a brief about various campaigns that are held to spread awareness, the advertisements that are created and the commendable efforts of the Dubai Autism Center.
After the first speaker, Mr. Humaid Al Amiri shared his experiences as a parent of a special child named Mohammed. He told the audiences how he was not aware about his son’s conditions but later on developed an understanding of his son’s peculiar behavior by researching online and hence, went about looking for autism centers in Dubai.
He also gave a piece of advice to the guardians of these special children “Be patient and try to live with them normally. They cannot control their stress. Hence you need to control them.”
“I am blessed to have Mohammad as my child as he taught me important lessons like patience, courage, love and hope.”
A video of the ‘Fun Day’ that was organized by the students on April 27, 2010 at the Dubai Autism Centre was shown as well. Various activities such as face painting, games and DJ-ing were held for the children. Raw material was also provided to them so that they could create their own art work. “The kids were wonderful, they responded well to us, they had real fun, they were very happy with all the games that we had organized and we all had a very nice time together.” said Behlul Mohammed, who had also volunteered for the event.
The event was sponsored by Crystal Gallery, Oasis, Lacnor, Associate Traders, Milko, Best peanuts and Kitch cupcakes.
Overall the event was beautiful and gave out a very serious message. The event ended with a screening of Rainman, an inspiring movie about autism. 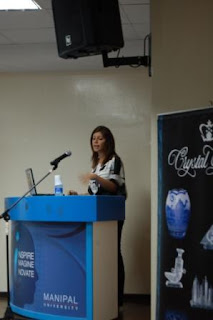 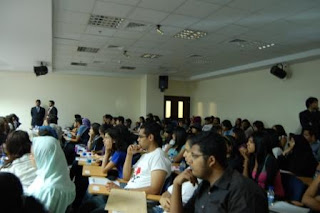 Students at the autism seminar
Article by Nafisa Zaki
Photographs by Deepa Narwani
Posted by MANIPAL DUBAI BLOG at 11:38 AM