The Skyline inter-school and college table-tennis tournament ended on Thursday, 29th April 2010. The three day tournament saw schools and colleges compete against each other for the top honours. Still charged up after their victory at Bits, our very own Manipal University girl’s table-tennis team continued their winning spree on the second day (28th April 2010) at Skyline University College as well. In the semis, Manipal had to play Bits in order to progress into the finals. The three players’ format meant that we had to win two games per match to move closer to the winning trophy, and we did just that with ease. First up was Nikita who faced Supriya of Bits in the singles. Nikita showcased her prowess at table-tennis when she won the game in three straight sets; 11-3, 11-0, 11-6. Next, she teamed up with Ayesha for the doubles match against Bits’ Supriya and Isha. Here too, the victory was ours, when Bits was defeated 11-2, 11-5 and 11-7. In the final, which was conducted on the same day, Manipal was pitted against University of Wollongong, Dubai (UOWD). Following the same strategy as earlier, Nikita stepped in to play Rekha of UOWD. Finals are a shaky affair and a few mistimed returns by the opponent cost Nikita her points. However, she got back in form and not giving UOWD a chance to win any set, won the game 11-4, 11-8 and 11-5. Just a game away from triumph, our duo, Nikita and Ayesha, were determined to take the game in their hand. Teeming with confidence, they faced Rekha and Abigail of UOWD for a game that was just three sets away from the ultimate goal. After a quick and easy three sets, glory was ours. Our girls beat UOWD 11-3, 11-6 and 11-6. The performance by Nikita and Ayesha was so good that they did not require the third player of the team, Joanna, to play. Victory in two tournaments has given our girls’ confidence a massive boost. They are now ready to face some more competition at Gulf Medical College (GMC), Ajman, which is the last sporting tournament slated for the season. Congratulations to the girls on their stupendous performance and wishing them great luck for the next tournament. 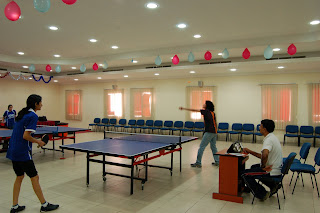 In the finals against UOWD 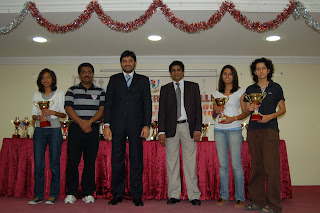 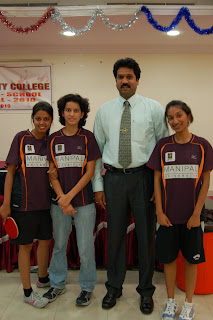