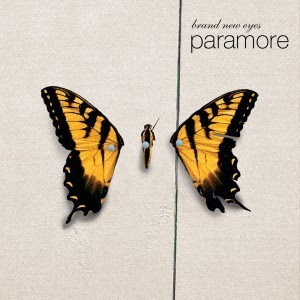 When Paramore announced they were having internal issues, soon after the release of their second album no one knew what to expect. Would the American rock band that did so well, for so many years with the criticism of having a female front woman, finally give up and disband?
The answer was far from it. Taking their issues and mixing it with anger, soul and impeccable guitar riffs, Paramore only came back stronger, releasing their third album ‘Brand new eyes’.
There’s no denying that lead vocalist and keyboardist Hayley Williams has a ferocious set of pipes, but it was her heartfelt, blatantly honest lyrics that made this album seriously differ from the previous two.
Singing songs such as ‘Playing God’, ‘Ignorance’ and ‘Where the Lines Overlap’, Williams addresses those problems in her band, and how exactly she feels around her band mates, who are like family to her, having grown up with them. The guitar riffs are definitely much heavier on this album, compared to the others displaying a whole new range of emotions felt by each of the band members. It is still, however, very much the same Paramore style, so hardcore won’t be disappointed but rather pleasantly surprised, with the band’s evolution.
Also with the introduction of a new rthymn guitarist Taylor York, the music just seems to be achieving more and more technical advancement and perfection, making the band better, professionally.
‘Brand new eyes’ is Paramore’s most awaited as well as their most successful album yet, selling 650,000 copies worldwide. Certified gold in the US barely three months after its release, Paramore topped the charts in many countries across the world including Australia, New Zealand, Ireland and the United Kingdom. It’s easy to say that the feisty riot of a Paramore, isn’t going anywhere any time soon.
Paramore is back with ‘Brand new eyes’ and they are better than ever before.
By Stacey Pinto
Image courtesy: http://www.bp.blogspot.com/
Posted by MANIPAL DUBAI BLOG at 12:19 PM