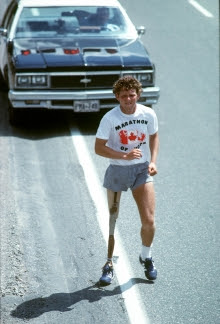 Terry Fox during his run.
He is a hero who still inspires millions in the fight against cancer even after 30 years of his passing. Despite having one leg amputated, being an athlete, he ran to raise awareness for cancer for 143 days completing 5373 kms before he succumbed to the deadly disease in 1981.
Terrance Stanley Fox was a young Canadian cancer patient and an activist who has inspired millions to run to raise funds for cancer patients. The Terry Fox Run is the largest single-day fund raiser for cancer research in the world, conducted in his honor marking his fight against cancer.
Cancer in the UAE is the third leading cause of death for the citizens, after heart diseases and traffic accidents. This is the 18th year that Dubai hosted the Terry Fox run on Friday, February 25th, 2011. People from all nationalities gathered at Mamzar Park Dubai to have some fun under the sun, by being part of the Terry Fox run.
The event began at 9:30am in the morning, with the weather being a pleasant 27 degrees Celsius. Despite being a weekend, people woke up early and ran for a cause. There was a lot of buzz and enthusiasm which set in as people cheered and played the drums and   other musical instruments. People walked, ran, roller bladed and skateboarded, wearing their Terry Fox T-shirts. There were also people who carried messages in support of cancer patients, which were quite heartening to read.
All in all, the event was a huge success, attracting 8000 people of various ages and nationalities, who helped in raising AED 500,000/- for cancer research. 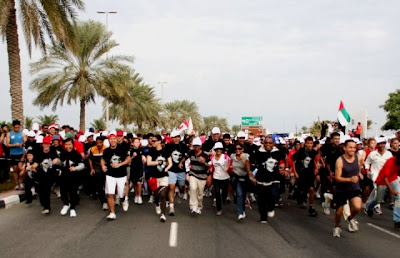 A Snapshot of the Terry Fox Run Dubai 2011 from their Facebook page.

“I don’t feel that this is unfair. That’s the thing about cancer. I’m not the only one, it happens all the time to people. I’m not special. This just intensifies what I did. It gives it more meaning. It’ll inspire more people. I just wish people would realize that anything’s possible if you try; dreams are made possible if you try." ~ Terry Fox

Posted by MANIPAL DUBAI BLOG at 9:03 AM