Yesterday, cinema enthusiasts celebrated the 80th anniversary of "Alam Ara" India’s first movie featuring sound which opened to thronging crowds at the Majestic Cinema in Mumbai on March 14, 1931.
Google paid tribute to "Alam Ara" ("The Light of the World") by designing a special doodle to mark the day sound arrived in the present “Bollywood”. A doodle is a modification of the official Google logo to commemorate holidays, birthdays of famous people, and major events. "Alam Ara", also has the distinction of being the film with the first song in Hindi films.

The film was directed by noted director Ardeshir Irani and was based on a Parsi play written by writer Joseph David. The movie was a love story between a prince and a gypsy girl. It starred master Vithal, Zubeida, LV Prasad and Prithviraj Kapoor. Alam Ara was made using microphones that had to be hidden from the camera's view. It ran for two hours and four minutes, and used a Tanar Sound System to record the dialogue. It was shot with the Tanar single-system camera, which recorded sound directly onto the film.

Being the first movie where audiences could actually hear dialogues and sound in India - it was advertised with the line “All Living. Breathing. 100 percent talking’. The Hindi punch line was even more colorful: ’78 murda insaan zinda ho gaye. Unko bolte dekhkar.’ (78 people came to life. Watch them speak.)

The tragedy, however, is that the film may be lost forever. In 2008, an Information and Broadcasting ministry official revealed that no prints are now available with the National Archives of India. The last existing prints were destroyed in a fire at Pune's National Film Archives in 2003. A search was conducted across the country but no print of Alam Ara could be found. 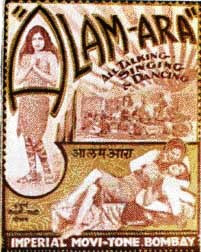