No feedback on feedback numbers 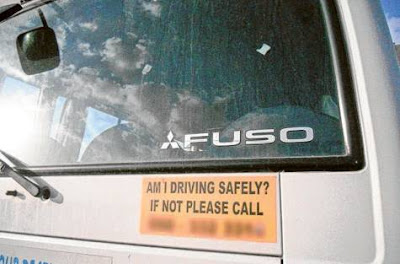 * Feedback telephone numbers usually do not have any effect, according to Gulf News reader Mariza Zora Moidy. She said: “What is the purpose of having a number to call if it makes no difference?”
* Image Credit: Mariza Zora Moidy/Gulf News Reader
At some point, I am sure people would have noticed mini vans or school buses full of children being driven rashly and at high speed, endangering their passengers' lives.

At times, the drivers are also seen driving without a seat belt. The irony is that all these vehicles have a message near the rear window, stating in bright yellow: "Am I driving safely? If not please call," followed by a telephone number.

The idea of having a contact number for the public to call is laudable. However, what happens when one tries to call is another story.

The phone is usually answered by the driver himself, who promptly hangs up or hears you out with indifference and there is no change in the reckless driving pattern.

What is the purpose of having a number to call if it makes no difference? It is frustrating when people who really want to make a difference call and are met with a wall of silence.

It would be more effective if the numbers given on the back of the buses were that of a supervisor or person in charge.

I urge schools, companies and the authorities to address this issue by ensuring the feedback numbers are relevant. It will help make Dubai's roads safer.

The reader is based in Dubai.
Posted by MANIPAL DUBAI BLOG at 9:46 AM