Manipal University Dubai’s sport teams have always been a force to reckon with. This year again, by delivering consistent winning performances - the Manipal University Dubai teams dominated by sweeping various titles, awards and accolades. Under the keen guidance and training of Mr. Krishnakumar, Sports Officer the students have participated and have brought results to the already overflowing trophy cabinet. 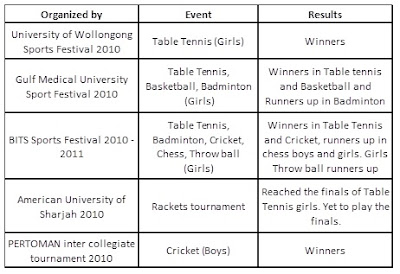 Mahe Manipal team clinch girls cricket title
April 27, 2011, Gulf Today     DUBAI: Mahe Manipal girls team defeated hosts Bits Pilani, Dubai by six wickets in the final to clinch the cricket title in Bits Sports Festival.Bits Pilani, Dubai opted to bat first after winning the toss. The idea to bat first did not went in their favour as they lost both the openers in the second over of the game.After losing the openers they never recovered as lost the wickets at regular intervals and were all out for 63 runs. Dhakshita Dodeja (15) was the top scorer for Bits.Mahe Manipal’s  Mariam and Nikita Phadke shared two wickets each. In reply, Mahe Manipal achieved the target losing four wickets.