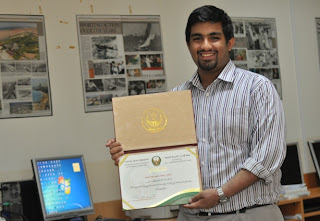 The General Directorate For Residency and Foreigners Affairs in Dubai in its aim to create educational and practical environment organised the "Sharat Al tahadi" competition.
Manipal University Dubai participated in competition along with both private and public educational institutions across the UAE.
The entry for Video Documentary by Joshua John, 2nd year student from Dept. of Media & Communications won the First Prize in the Video Documentary category. Joshua was rewarded with a Dhs. 10,000 and a certificate. He received the award from Major General Mohammed Ahmed Al Marri, Director of General Directorate of Residency and Foreigners Affairs-Dubai. A proud moment for Joshua and Dept. of Media & Communications, Manipal University - Dubai.

The Award Ceremony was organised at Cultural and Scientific Association Building in Al Mamzar, Dubai on 21st May 2011.
Posted by MANIPAL DUBAI BLOG at 7:59 PM