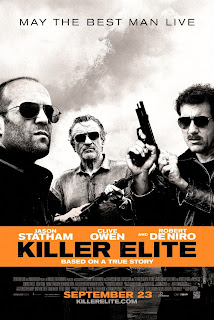 Cast: Jason Statham, Robert De Niro, and Clive Owen
Director: Gary McKendry
Genre: Action
Highly recommended for all the action lovers, Killer Elite is an exceptionally well presented action movie with all the physical encounters and brawls nicely choreographed. The story revolves around Danny (Jason Statham) an ex- SAS agent, who decides to forgo his job and abstain from killing. But things don’t work as planned for Danny.
The script unfolds when Hunter (Robert De Niro) Danny’s mentor is abducted and held captive by a rich Sultan in Oman. The Sultan works out a deal with Danny asking him to avenge three SAS agents who were responsible in the killing of the Sultan’s son, negotiating to free Hunter and also provide Danny with a large sum of money in return.
Knowing it would not be easy to kill three competent and well trained SAS agents. Danny gangs up with two of his friends to be his apprentice in the killing spree. In the meantime, getting suspicious about the recent change of events and the abnormal deaths of SAS agents, an underground SAS Operative Spike (Clive Owen) sets out to find the culprits and stop them.
More action follows in this process, bringing Danny and Spike face-to-face with one another. Even after constant attempt to stop Danny from killing his last target, Spike fails. Danny finally succeeds in his mission and frees Hunter from the old Sultan. But nevertheless, action doesn’t stop yet. Figuring out their last target the third SAS agent wasn’t guilty of his son’s murder, the sultan calls for Danny again and this time he threatens to abduct Danny’s love interest Anne (Yvonne Strahovski).
Pressured by the threats, Danny goes about once again to kill his latest and last target, but this won’t come easy to him, as Spike and his operatives are on a vigil. With great difficulty and lots of action Danny fights Spike, kills his target, saves his soul and leaves the scene. He heads back to the sultan and claims his money only to go back to his girlfriend and start his life anew.
Released at theatres near you, enjoy this power packed movie with your pack of Popcorn and Nachos. Get ready for an hour of nonstop action and fun.
Review by Fathima Layeek
Posted by MANIPAL DUBAI BLOG at 8:56 PM