Overview of Day 2 and upcoming events for Day 3 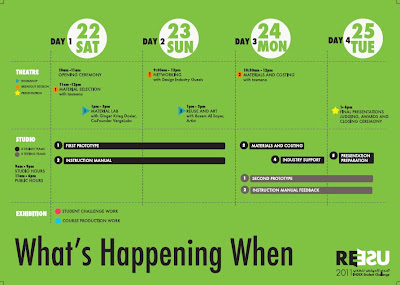 Day two of INDEX 2011 at the Dubai World Trade Centre started off with a workshop labeled “Networking with Design Industry Guests”. This informal session aimed to increase interaction between design professionals, students and universities enabling them to gain networks and establish connections within the industry. The speakers conducting these workshops were Tarek N Qaddumi from TNQ Architects and Engineers; Carrie Das, Design Manager from AHK Interior Contract Furniture and Ebrahim Malekzadeh, an interior design professional.

This was later followed by another workshop, Reuse and Art with Basem Al Sayer, locally-based Artist that highlighted how students can reuse raw materials to create new and innovative art.

While the Student Challenge continued in the backdrop throughout day two and went on until 9.00 pm, as the eight teams completed their initial prototypes and created instruction manuals.

Workshops held tomorrow will begin at 10.30 am, the first one being on Materials and Costing with Tasmena is something to look forward to. While students from the Student Challenge will build their second prototypes based on the aforementioned instruction manuals. The winners of the competition will be announced on day four, 25 October 2011.


For more updates on INDEX 2011, watch this space.

Posted by MANIPAL DUBAI BLOG at 12:00 AM