‘Beat Diabetes’ Walkathon-Walk for a good cause

18th November, 2011- A Friday when people woke up at the break of dawn to head off to Oasis Centre, Dubai. The area was filled with over five thousand people donning blue t-shirts and caps, as a symbol to support the ‘Beat Diabetes’ cause.
Launched in 2009, this year marked the third edition of the annual awareness campaign, organized by Landmark Group which saw participants of all ages with maximum amount of enthusiasm prevailing around the premises. T-shirts and caps were provided to every participant; children also enjoyed themselves in their blue outfits. 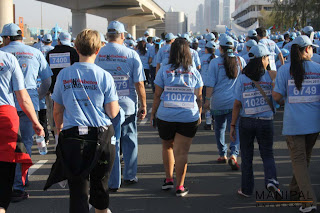 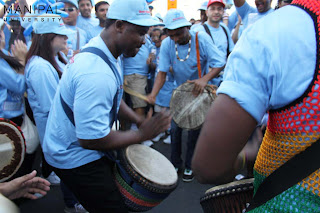 The crowd was filled in with excitement when the legendary Pakistani cricketer, Wasim Akram, headed the stage with motivational words to support the cause. Akram, who himself is a Type 1 diabetes patient, led the walk for the second consecutive year.
Minutes before, a warm-up session was held by the Fitness First trainers, welcomed by the participants. The music enthralled them, followed by uncountable numbers of blue coloured balloons that were released in the air, that started off the ‘Beat Diabetes’ walkathon.
Anil Kumar, a Media and Communications student of Manipal University, Dubai, and first-time participant at the walkathon said, “I didn’t expect the walk to be as exciting as it was, especially for someone like me who is participating for the first time in any sort of social cause. Awareness was created and spread along with enjoyment. This has truly encouraged me to take part is more walkathons. The presence of Wasim Akram provided additional zest to it.”
The 3.1 km walk was joined by musical session by Dubai Drums as well. People enjoyed drumming and dancing throughout, and took masses of pictures as well to capture the moment. Free water was provided throughout and after the walkathon. A complimentary check-up for glucose was also available.
‘Beat Diabetes’ Walkathon was encouraged, supported and spread to out to thousands of people. Over 3500 people took the free blood glucose test, participants made sure that they gained enough knowledge about this “silent killer” disease.
By Maria Hussain
Posted by MANIPAL DUBAI BLOG at 1:04 PM