Dubai Airshow this year broke the record with 56,548 visitors who attended and enjoyed one of the National Day’s celebrations. The theme of this Airshow was dedicated to the celebration of UAE’s 40th anniversary which is in two weeks’ time on 2nd December.

The celebration ended on 17th November 2011 with an impressive air display by the Emirates who used one of its Boeing 777-300 ER aircraft. The spectacular aerobatic show was headed by the Al Fursan display team who opened the aerial display proudly trailing the colours of UAE national flag to the delight of the crowd below. 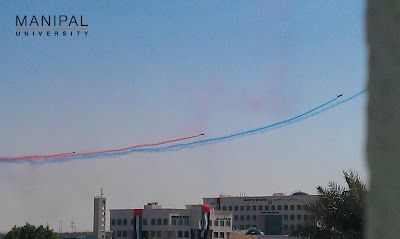 The Dubai Airshow was organised under the support of H.H Sheikh Mohammed bin Rashid Al Maktoum, Vice President and Prime Minister of the UAE and Ruler of Dubai, and in co-operation with Dubai Civil Aviation Authority, Dubai Airports and the UAE Armed Forces.
Alison Weller, Managing Director of airshow organiser F&E Aerospace, said: “We promised a Dubai Airshow that would be bigger and better than ever and we did not disappoint. The past week has been notable for its buoyant crowds, spectacular aerial displays and astonishing order announcements. As the show comes to an end, it will be time to take stock of the successes and the challenges, in preparation for Dubai Airshow 2013 at Dubai World Central!”
Report and Photographs by Fatema Khokha
Posted by MANIPAL DUBAI BLOG at 5:36 PM