16 Days of Activism: No Violence against Women & Children 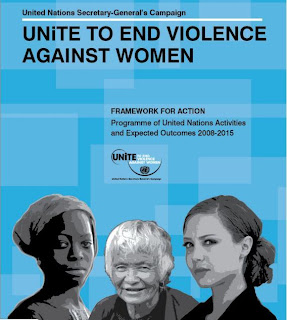 Read the framework of the campaign that aims to be achieved in all countries by 2015
According to the United Nations website, an unknown fact is that in many states there are no specific legal provisions against domestic violence and that marital rape is not a lawful offence in more than 50 countries. UNiTE works alongside governments in different countries in a bid to develop and implement national laws and supports women (victims and survivors) from all walks of life to get their deserved rights and respect in the society.
The Role of Men
Men who maintain silence and tolerate the use of violence and dominance over women are normalizing the gender inequality and negative stereotypes in countries are equally responsible of the rise in crime rates and violence towards women.
“Men must teach each other that real men do not violate or oppress women- and that a women’s place is not just in the home or the field, but in schools, offices and boardrooms,” said Secretary General Ban Ki-Moon at the launch of the ‘Network of Men leaders’ in 2009.
Show your Support
The South Africans are called to support the campaign by wearing a white ribbon to show their solidarity. Wear a white ribbon and create greater awareness about this campaign.
You can even log onto the website http://www.saynotoviolence.org. Register, take an action and support the campaign ‘No Violence against Women and Children.’
Report by Qudsiya Siddiqui
Posted by MANIPAL DUBAI BLOG at 1:17 PM