Carla’s Way: The Rise Of A First Lady

Documentary Voices is a regional platform where movies are screened on issues that affect society. The final year students of the Department of Media and Communications, Manipal University Dubai attended this year's edition at Kilachand Studio, Dubai Community Theatre and Arts Centre (DUCTAC). The event took place from 27th to 29th November, this year the main theme was ‘women empowerment’.

Being the fourth edition of this successful event, the film festival began with inspiring thoughts of Mahshid Zamani, Managing Director of Documentary Voices. She spoke about the traditional roles women have been attached to, those roles are not demeaning but are definitely not enough either.
Philippe Jalladeau, a renowned French cinema historian spoke a few words about French cinema’s role in women empowerment. Jalladeau said that the responsibility displayed by women directors towards the society is immensely challenging. Sharing a few anecdotes with an attentive audience, he also spoke about his ideology of how women were less compromising then men.
The ceremony was an appropriate gesture to compliment the very first screening of a movie. Carla’s Way: Birth Of A First Lady, a movie by Marc Berdugo was well appreciated by the audiences, a movie defining the life of Carla Bruni Sarkozy. (Read film review below).
The event was an elegant night out with Middle East Film industry’s prestigious names and socialites.

Film Review: Carla’s Way: The Rise Of A First Lady 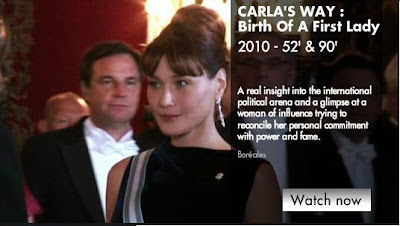 Showcasing this larger than life personality on-screen in a movie directed by Marc Berdugo was the premiere for the gala night of Documentary Voices.
Singer, model and now the First Lady of France - Carla Bruni Sarkozy, the documentary traces the changes in her life after being married to Nicholas Sarkozy. Filled with a few powerful moments, the movie defines Carla Bruni as a woman of substance, a woman who knows when to play what role, and a woman who supports her husband steering away from politics.
As the film festival focuses on empowering woman, there was no better movie that could do justice to the opening. Carla’s way in bits and pieces was too good to be true, but realistic as well; Carla’s unpopularity for visiting Rome on her own, or how critics think her cause for AIDS is a set-up for entering politics.
Whatever role she plays, is judged and related to her husband. In many ways she is the diamond who sparkles next to him, it is a reality hit to see how French still have customs that stereotype first lady’s to supporting roles.The movie was an eye-opener as the film questions which Carla's image, until now we remember Carla as a strong, independent French first lady.
By Heena Makhijani
Photographs by Christine Cherian
Posted by MANIPAL DUBAI BLOG at 7:51 PM