The Sharjah Light Festival commenced on the 9th of February and is running till the 17th of this month over a period of 9 days. The spectacular 3D light show with lasers are displayed on famous landmarks around Sharjah such as Al Majaz waterfront, Al Majaz Mosque, Sharjah International Airport, Al Hisn Fort, Central Souq (Gold souq), Sharjah Chamber of Commerce, Consultative Council and Kuwait Square .
The light festival celebrates Sharjah’s cultural journey and rich history. The amazing lights and lasers were played with to cast a reflection on the external facade of Al-Qasba coupled with music which enthralled the audience resulting in claps and hoots.
Hordes of residents flocked the area to watch the 9-min light show held over a period of every 12 minutes. There’s another light show taking place in the internal facade of Al-Qasba which happens at the same time span (photographs below): 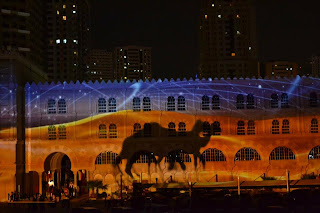 Light Show at Al Hisn Sharjah Fort- a short clip of the lights:

Video by Neha Kalvani
Click here to view more photographs of the light show at Al Hisn Fort
For more information about the Sharjah Light Show, visit their website. www.sharjahlightfestival.ae
By Qudsiya Siddiqui
Posted by MANIPAL DUBAI BLOG at 6:51 PM