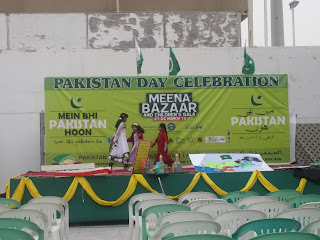 Photos by Maria Hussain
23rd March marks an imperative day in the history of Pakistan, when it became the first Islamic republic in the world. This year, the National Day was celebrated by the expats living in the UAE where they had the opportunity to enjoy various events at one podium.
Notable bodies representing their communities include the Pakistan Embassy in Abu Dhabi, Pakistan Association Dubai (PAD) and the Consulate General in Dubai. Flag-hoisting ceremony was held on Friday, March 23 2012 by Syed Ahsan Raza Shah, who is the Charge d'Affairs at Pakistani Embassy in Abu Dhabi. He unfurled the flag at the embassy premises in Abu Dhabi.
Pakistan Association Dubai (PAD) celebrated Pakistan Day with a series of events in a view to engage all segments of the expatriate community. The nine day events (16th to 23rd March) were hosted to highlight the significance of the Pakistan National Day through various activities that took place under the theme “Mein bhi Pakistani hoon” (translation: "I am also Pakistani").
The celebrations started off on March 16 with Six-A-Side Cricket Tournament at the Skyline University College ground in Sharjah, in which eight teams from Pakistani schools participated. In the evening, a Mushaira (Urdu poetry session) was held at the PAD lawn with almost 20 poets reciting their verses.
A four-day Meena Bazar and Children’s Gala took place on the PAD premises from March 21 to 24. There were 40 stalls of Pakistani products, live food corner, folk music and dances, magicians, and bouncy castles. Other activities included national song competition, dress competition, face paintings, drawing and art competition, best project (from various schools), tabloids, an ice-cream eating competition, fun games, karate and lucky draws.
Along with an Education Expo, Health Awareness Day was observed on the PAD premises with stalls from various hospitals and clinics. Basic health checks for blood pressure, blood sugar, body mass index (BMI) and cholesterol were offered free.
The car covered by 33,000 new UAE coins by a Pakistani to mark the National Day of the UAE last year was also displayed.
According to Dr. Ziaul Hassan, president of the PAD, “By demonstrating their talent, Pakistanis from all walks of life will try to portray a better and soft image of our country and society. In this campaign, a large number of people were contacted, including Pakistanis, Emiratis and other communities”.
There were many participants and visitors, who showed affection and love for their country staying abroad through this cultural fiesta. Pakistanis were vibrant and enthusiastic, and demonstrated their utmost dedication towards their National Day.
By Maria Hussain
The writer is a final year journalism student at Manipal University, Dubai
Posted by MANIPAL DUBAI BLOG at 9:52 PM