Twenty two final year media students specializing in Journalism and Television were given an opportunity to collaborate with middle east publication, Broadcast PRO to provide extensive coverage at CABSAT 2012 between 28th February to 1 March 2012.
In its 18th edition, CABSAT is the Middle East's and Africa's largest digital media & satellite expo that features over 750 companies from over 55 countries including 14 national pavilions in a period of three days. 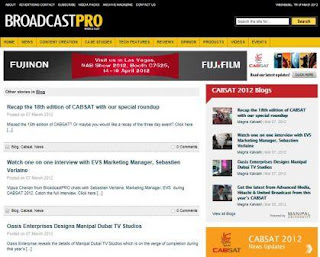 
Presley Viegas  from Manipal TV takes you through a round of the setup which brings new fresh approach to Live Studio multi cam shoot.﻿﻿
Be sure to like our Facebook and follow our twitter feed @ManipalDxb for constant coverage.

Posted by MANIPAL DUBAI BLOG at 10:37 AM