Last week, United Arab Emirates was host to one of the first and largest comic cons in the region, The Middle East Filmand Comic Con (MEFCC) held on 20th-21st April was a haven for comic, sci-fi horror and fantasy fans. 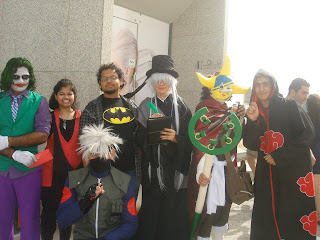 A unique platform gathered people of similar interests, allowing them to boldly come out with their fantasies and dress up as their favourite fictional characters or their own alter-egos a phenomenon known as cosplaying.

But for one person it was a real experience and his name is Saud Al Hazzani a cosplayer from Saudi Arabia who took part in the Middle-East first comic-con cosplay competition and won it on 21st April 2012.

Saud is a 28-year-old who works at Microsoft Arabia as a retail partner account manager, is someone who is best described as a fun person who loves what he does and by that he means the other side of him who is a cosplayer.

Member of Dubai Anime Club and cosplaying for almost five years now, Saud said he first got inspired by all the Anime Con events he heard about, of course he never thought that one day he would be living the dream and taking part in the a cosplaying event at region’s largest comic con, MEFCC.

The first cosplaying event he attended was at a convention in Bahrain known as Banicon.

"I decided to give it a try for fun and the overwhelming fun I had there just got me addicted to cosplay." said Saud. 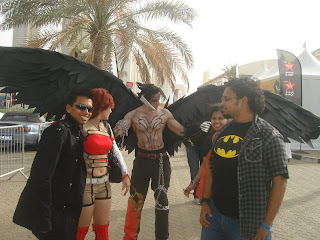 Saud's proud moment as he cosplayed a popular character from Tekken and
won first place at MEFCC. For more photographs click here

He has also stated how cosplaying brings out the creative side of him which and also gives him the opportunity to make new friends with people who share the same interest as him.

Many people look at cosplayers, think they are just plain crazy but they don’t know exactly how difficult it is, especially when it comes to finding the right materials for creating your own costumes.

For Saud the biggest obstacle is finding the time to work on costumes as he is a full time employee and most of the materials are hard to obtain as the cosplaying scene isn’t that popular here in this part of the world.

"You can imagine how I will be explaining my cosplay items to other country customs,” said Saud who finds that the main problem about comic cons is that they take place in other countries and not here.

He hopes that will change now for he believes that cosplay is a concept of fun and that no one can be the best at it, as it’s all about making what you like and enjoying.

Saud won the Middle East Film and Comic Con cosplay competition cosplaying as a character from a popular fighting game, Tekken. His winning costume will be one of his most memorable moments as he heard a crowd at comic con screaming his name when he literally spread his wings to showcase his costumes features.

"It was one hell of a moment," Saud said. “Out of all the events I’ve been to, this was the best.”

Comic con such as these allows people to express themselves and to experiment with their creativity, it is an event that brings out the best in people and in the long run inspires the most of us to just have fun and be who we want to be.

By Brendon .A. Rodrigues

The writer is a first year media and communications student from Manipal University, Dubai.
Posted by MANIPAL DUBAI BLOG at 11:45 AM